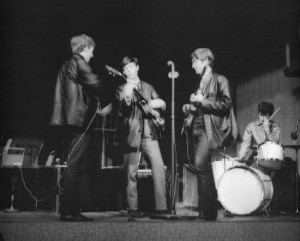 DEVIN McKINNEY  •  What a bounty this autumn brings us. In addition to the long (as in loooong) awaited first volume of the Lewisohn biography (the multiple iterations of which will blanket like sweet snow our Fall and Winter); Kevin Howlett’s The Beatles: BBC Archives 1962 to 1970, which looks indispensable for the cover alone; and The Fifth Beatle: The Brian Epstein Story, a new graphic novel by Vivek J. Tiwary (which I can only hope comes close in revisionist brio to the obscene, invidious, scandalous, defamatory comic, authored by John Hughes, that appeared in the National Lampoon‘s 1977 Beatles parody issue, depicting Epstein as a mad scientist and pederast who kidnapped the Silver Beetles from Hamburg streets and stitched together the lovable Cardin-suited moptops to be his sexual playthings: what a notion for an 11-year-old Beatle fan to encounter), news comes through today that On Air — Live at the BBC Vol. 2, a collection of Beatles radio shots recorded on Mother Beeb mostly between 1962 and 1964, will be released on November 11. As if all that lineup were not enough of a call for your coin, a remastered reissue of the new volume’s precursor, 1994’s Live at the BBC, will appear the same day.

Why do I/we look forward to a collection of this sort? A look at the tracklist confirms one’s guess that there’s nothing on the new release that hasn’t been on bootleg since Hector was a pup (that is, 1986, when the Beatles at the Beeb vinyl boot series commenced). The sound is bound to be better than before, though even that affirmation is stained with relativism:  I still rue what the first BBC album’s digital engineers did to the 1962 “Keep Your Hands Off My Baby,” sanding and planing its rough edges so thoroughly and unsubtly that it sounded barely human—which not only obviated the cleanup work but sorely missed the musical point:  The source tape was so poor, and the performance so raw, that it was all rough edges, and technology is mindless unless it allows for that.

So again, why? For the packaging. That’s it. New photos, new graphics, new liner notes (unamazing though those are bound to be, and probably unamusing too, with Derek Taylor no longer around to spin his webby weavings of wordings). We want to hold the slick, shining, dreamy thing in our hands, smell the newness, feel the cream of luxe surfaces, ogle the pix and go to bed dreaming of Beatle teeth.

That’s why, that’s it, and that’s a lot. The look, feel, entire physical reality of Beatle-ness has always been a big part of the joy of owning their product, of buying it freshly minted, living with it, having it unto old age. Beauty and novelty are wonderful, sustaining things, and there was never anything so beautiful and novel as You Know Whom.