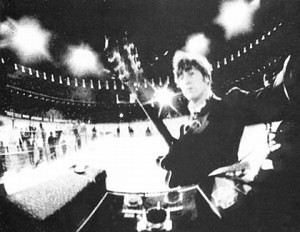 “I swear, I don’t know how much more of this I can take.”

About six years ago a fellow Beatles fan named Benjamin Levi Marks sent me a few discs of his lovingly crafted, exquisitely detailed homebrew set called “The Ultimate Beatles Anthology.” It was designed to fill in the many gaps left by the Beatles Anthology — as well as, in Professor Marks’ own words, “frame both the state of the world and the state of the Beatles as they stepped into Twickenham on January 2nd, 1969 to launch their third revolution. We all know that what they planned is not what ended up happening a month later.”

You can listen to Professor Marks’ Ultimate Anthology here.

I can date this gift with some confidence, because I am 46, and distinctly remember listening to them on the drive into Hollywood for my 40th birthday celebration: a night of Amnesty International comedy movies at the Egyptian Theater, emceed by the aforementioned Martin Lewis.

Professor Marks, please contact me through the site so I can get the tracklistings from you. I am listening to them in iTunes…a LOT.

To close on this lazy Saturday before Labor Day, I give to you a domestic scene. Mike is at his computer, obsessively loading Beatles tracks into his groaning iTunes. Kate is ten feet away, collecting books scattered around the apartment in the couple’s usual frenzy of reading. A obscure version of “If I Fell” ends. In the quiet, Kate says:

“Thank God for Sgt. Pepper.”
“Why?”
“You know, I love the early Beatles…”
“But?”
“If you listen to a lot of ’em right in a row — you realize John would’ve opened his wrists if they hadn’t moved on.”

The Beatles without earmuffs