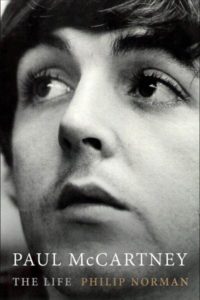 Paul, looking over his shoulder

Adam Gopnik has contributed a peculiar review of Philip Norman’s new bio, Paul McCartney: The Life. The TL;DR is “A reader familiar with the past twenty years of Beatles biography will have a pretty hard time finding a single new fact or revelation within [Norman’s biography].”

Pretty damning, right? Apparently not; Gopnik hastens to add that we shouldn’t blame Norman. “After Lewisohn; after Barry Miles’s strange Many Years from Now, a semi-official biography; after Albert Goldman’s The Lives of John Lennon and the Beatles Anthology series, there just isn’t much left to say. Even if there were something left to say about McCartney’s life in the forty-six-year period since the Beatles’ breakup, the crucial seven years that make the rest matter are by now almost too well documented.”

Suddenly we’re not talking about Norman’s book, or even Paul McCartney, but Gopnik’s fatigue with the subject of John, Paul, George, and Ringo. After eight plus years of Dullblog, I feel ya, Adam — but there’s something weird about taking the time to write this review, much less deciding to publish it, if your core belief is “Meh, too much Beatles.” It’s difficult for me to have much of a reaction towards Gopnik’s piece, though, because there’s so little there to react to. The Beatles have been studied a lot? Why yes, they sure have. Why, then, did Norman write the book? Why did his publisher commission it? Good idea, or bad idea? Why are people still so fascinated? What does this Beatle-oversupply say about music, pop culture, modern media? Anything? And should people interested in Paul McCartney buy the book?

This latest generation at The New Yorker goes weirdly limp when confronted with the Beatles, and I have a guess why. Thanks to editors like Tina Brown, contemporary American magazines now live in a weird binary space, intellectually speaking; they long to either set the conventional wisdom on a topic, or overturn it. Everything else seems like small potatoes.

The conventional wisdom is that the Beatles are the ne plus ultra of modern pop, but there’s no juice in agreeing. It’s so culturally unassailable that no New Yorker writer can disagree without risk to the gravitas of the institution; The New Yorker isn’t some dude writing on Pitchfork. So what’s to say?

Even more than authority, contemporary media writers long for the Slate-like contrarian take. The only time Gopnik’s mind seems to engage is when talking about the recent contrarian biography of Allan Klein. This leads him to some very bizarre statements: “The problem is not that [Klein] was a thief [was he? Opinion, Adam?–MG] but that he worked in a business where thieving, of one kind or another, was the business.” Except that there’s a massive counterexample standing right there, in the person of Brian Epstein. Would the Beatles have ever happened, had Epstein been a Klein-like sharpie? Now that’s an essay worth writing — not only for the personalities involved, but for the larger questions of business ethics in our new Gilded Age. Perhaps what makes people more willing to excuse Klein’s chicanery now than in, say, 1975 or 1985, is the general deterioration of business ethics that is a necessary precondition for the 1% leaving the rest of us behind.

Gopnik consistently overplays his hand on this topic, saying for example, “In fairness to Klein, it should be said that few people imagined that the pop music of the period would be remembered eighteen months afterward, much less that it would still be hugely valuable half a century later.” In fairness to reality, that’s simply not true. In 1971, everyone from Sir Lew Grade to Jann Wenner to the stoned residents of dormitories the world over all believed that Beatles music was a valuable cultural commodity. And that’s the reason Klein couldn’t swindle Paul McCartney like he swindled Bobby Vinton. The reason a British court sent the Beatles into receivership wasn’t that the Eastmans played dirty or got lucky — it was because, even in 1971, the Beatles were considered to be one of Britain’s cultural crown jewels, worthy of being protected. And the court saw that Allen Klein was no protector, he was a gonif.

The unfortunate thing is that Gopnik’s clearly a fan — only a Beatle person would point out the perverse illogic of Norman’s earlier book being called Shout! (I remember spending a teenage afternoon trying to figure out whether the Beatles actually recorded the Isley Brothers’ song; surely their biography wouldn’t have been titled that if they hadn’t?) There’s something good, even great in him about the Beatles, but this ain’t it, and the central question remains unanswered: should fans plunk down their hard-earned for Norman’s book, or not?