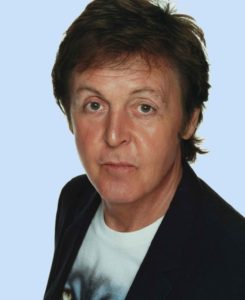 Apparently written around the time Paul McCartney’s marriage to Heather Mills collapsed, an alleged (and uncharacteristic) altercation between McCartney and his public prompted Philip Norman to editorialize in an article he wrote for the Daily Mail entitled What’s eating you, Macca?

After reading it I’d like to ask “What’s eating you, Norman?  His animosity toward McCartney is almost palpable.

Dear Macca,
The millions of people who regard you as pop music’s patron saint will have been shocked and disillusioned by your recent behaviour – though, as The Beatles’ biographer and a long-time observer of your remarkable solo career, it comes as somewhat less of a surprise to me.

Last week, you unleashed a stream of foulmouthed abuse at a photographer who had the temerity to try to take your picture during a late-night visit to London’s Tower Bridge, where the illusionist David Blaine is suspended aloft in his plexiglass prison cell.

According to the photographer, two of your companions, who strongly resembled ‘minders’, tried to intimidate him when he refused to hand over his film.

Not content with that, you were blisteringly rude to a bystander who asked if he could shake your hand. Even David Blaine came in for a bashing when you loudly referred to him as a ‘stupid c***’.  Later, in more familiar McCartney style, you tried to smile away the episode as ‘a boys’ night-out’ and protested that you hadn’t really meant publicly to fire your PR man for having apparently set up the media ambush.

But all your formidable spin-doctoring gifts could not undo the ugly, unnecessary scene.

Like many others in your superstar firmament, you have the ability to shrug off uncomfortable truths, abetted by the legions of yes-men with whom you surround yourself and whose sole function is to tell you that you are infallibly wonderful every day of your life. But I wonder whether the David Blaine incident may have led even you to ponder on the decline in your reputation over these past few years – and ponder, too, the extent to which you may be almost deliberately unravelling one of the most carefully tended images in showbusiness history.
As a Beatle, you seemed as close to perfection as a young man could be. A brilliant songwriter, a uniquely poignant vocalist, cherubically goodlooking, funny, charming, polite, wellspoken and considerate to fans, you seemed to have everything.

You were a secular Saint Paul, and the world and the world’s media ate out of your hand. Well, what a difference 35 years and £1billion make. In those days, it was hard to find a McCartney headline that didn’t sing your praises even more lyrically than you sang them yourself. Today, it’s hard to find one that doesn’t portray you as egotistical, grasping, small-minded, self-deluding, more than slightly absurd – and now, to cap it all, as moody, rude and foul-mouthed as any delinquent from pop’s kindergarten.

Consider the awful Press you were already getting when you decided to take that ill-advised ‘boys’ night-out’. Even your old friend and rival, Sir Mick Jagger, with his wrinkly stage antics and puerile pursuit of women a third his age, could hardly match it.

On your recent American tour, you were reported to be behaving like the worst rock megalomaniacs of the Led Zeppelin era. A special request added to your backstage requirements issued to promoters forbade meat to be served to you – or eaten by anyone in the road crew.

Above all, you portrayed yourself as just an ordinary musician on the road, who would pile aboard the tour bus with the rest of your band. However, I’m told that as you came offstage each night, the band were expected to line up and give you a ‘spontaneous’ ovation.

The fact is that, where you’re concerned, we have all swallowed an illusion as skilful as any ever created by David Blaine. All that’s happening now is that the mask is being allowed to slip.

For, even in those magic, innocent early Beatle times, you were never remotely like the smiling boy-angel the world took you for. You had just the same young man’s foibles as John, George and Ringo, as well as a good few peculiar to yourself.

The melting moon-face and sad puppy-dog eyes already masked a ruthless ambition to make it, with or without the other three. Remember how, even in the band’s earliest days of playing gigs for ha’pence on Merseyside and the Cheshire Wirral, you were always known by the others as ‘the Star’?

The niceness for which you became famous was not wholly illusory. All four of you Beatles were indeed incredibly nice and, more incredibly, managed to remain so, even after being penned in a goldfish bowl far worse than anything David Blaine could contrive.

The difference was that, while the others often gave way to understandable temper or frustration, you could never bear to drop that honeyed manner, whatever your true feelings.

Amid the trauma of The Beatles’ break-up, your wisest move – though few at the time recognised it as such – was to wed American photographer Linda Eastman.

The marriage proved a spectacular success, allowing you to combine your globally successful post-Beatles band Wings, featuring Linda on keyboards, with a stable home life known to few others in that echelon of the music business. Together you raised four children to be civilised human beings rather than over-indulged rock-brats. With shy, dignified Linda around – apart from a few aberrant drugs-busts, one of which got you briefly locked up in Tokyo in 1980 – your public profile was irreproachable.

The problem was that, jointly directing your band and your profit-rich publishing company MPL, you became ever more of a ruthless perfectionist and autocrat, elbowing aside anyone who threatened to steal even a molecule of your limelight.

Have you ever paused to wonder, for instance, why your feature film Give My Regards To Broad Street proved to be such a turkey? Quite simply, it was because, regardless of either the plot or the quality of screen actors you hired, you insisted on making yourself the soft focus centre of virtually every shot.

Yet, despite all these rumours and rumblings, your image endured – that of cheerful, cheeky ‘Mister Thumbs-Up’, an unspoiled boynext-door who still greeted each day with a Beatley cry of ‘Great!’

Linda’s death from cancer in 1998 and your obvious devastation unleashed a fresh tide of love and goodwill which diminished when you met and proposed to former topless model Heather Mills, a woman young enough to be your daughter.

It is obviously unfair to compare your new wife with Linda, even though both experienced exactly the same backlash for daring to marry a man whom a large part of the world’s womanhood regard as their personal property.

Much of Heather’s unpopularity may well be undeserved – but she does have an unfortunate knack of compounding it almost every time she opens her mouth. Heather has received much of the blame for the new, abrasive Macca we’re seeing, and certainly the symptoms are those which often tend to occur in a 61-year-old man with a much younger wife. Where once you carefully limited your public appearances, you’ll now willingly escort Heather to the opening of an envelope.

Your hair-dye is so obvious that, when you last played at the Oscars, it received an unofficial award as the evening’s best special effect. Swearing at a photographer may also strike you as youthful and macho, though I suspect you’d be far more upset if photographers began to ignore you.

So determined are you for Heather to be accepted that you even let her give you critiques of your night’s performance, a privilege you seldom gave to your fellow Beatles – and one which I doubt Linda ever exercised.
Recently, you refused a music industry lifetime achievement award because you said it implied your career was over and you had nothing left to give to music.

But hanging onto youth is only part of the reason why, despite all your colossal achievements, you continued to push yourself to such an extent, touring for months on end and pumping out records as well as writing classical symphonies, exhibiting your (not very good) paintings and publishing your (at best mediocre) poetry.

It seems you cannot rest until you’ve persuaded us that our typecasting of The Beatles all those years ago was so completely wrong; that you weren’t just the ‘nice’ one while John Lennon was the arty and edgy one; that you can do anything John ever did, and still more.

That said, it’s almost some comfort to us lesser beings that, even if you are Sir Paul McCartney, with that vast pile-up of achievement and honours behind you, you can still be insecure enough to wake in the night, sweating and fuming over the running-order of a credit on a record made almost 40 years ago.

In other words, Sir Paul, you’re only human. And that’s what you’re belatedly starting to show us.
Yours,
Philip Norman