Lennon and McCartney On The Tonight Show, 1968 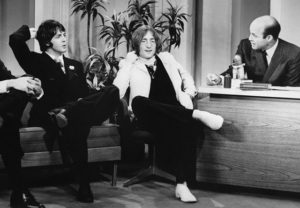 Speaking of his appearance with Paul McCartney on the Tonight Show to announce Apple Corp., John Lennon said it “was the most embarrassing thing I’ve ever been on.”  And if you listen to the audio portion (the video portion is no longer available), it IS truly cringe-worthy.

Sitting with a slightly inebriated Tallulah Bankhead and a polite but clueless Joe Garagiola (who was subbing for Johnny Carson), John and Paul endured 22 minutes of embarrassingly vacuous questions (“Will you ever be able to top Sgt. Pepper?”, asked Garagiola) which made ME want to put a fork in my ear.

An interesting backstory to all this is this account by Craig Tennis, a Tonight Show employee:

The [pre-] interview wasn’t easy for me–in fact I was freaked. How does one interview the biggest superstars in history at the apex of their glory without coming off like a boob? So I went the direct route and tried to find out what basically they wanted to say to the audience and why.

Apparently, the half dozen or so questions I asked made sense to them, and after the last one–which I don’t remember, but at which their eyebrows shot up–they said, “Now, who is this man who’s going to interview us, this Joe Garagiola person?” I told them who he was, (all in praise) but they had apparently already made up their minds that they didn’t want Joe to interview them.

What they wanted, to my horror, was for me to interview them. I spent five or ten minutes trying to explain to them that that was not possible, but it didn’t sink in–at one point they even threatened not to do the show unless I would go on with them and do their interview. My life flashed before my eyes, I can tell you, because there was no way I was going to go out in front of that camera with the Beatles; not only would it have been a ridiculous condition upon which to end my tenure on the Tonight Show, but I knew that it would also cripple my career permanently. Eventually, I talked them out of it and they agreed to go on.

But when they finally joined Joe, disaster struck. He started by asking one or two really silly questions and they went downhill from there. He just sat there saying things like, “Gee, I hope my kids get to see this,” and “Boy, am I going to be a popular guy in the neighborhood.” It was so inane that the Beatles became visibly uncomfortable, and Joe had to actually let them leave. The Beatles left believing that they had been sloughed off by this guy, and in a way, I guess they had been.

Here’s the audio of the interview.