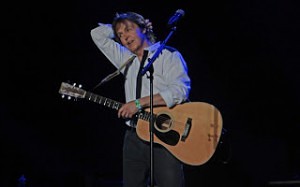 Last Thursday Rolling Stone online published an interview with Paul McCartney about his current tour. It sounds like a stellar show—I’m sorry I haven’t been able to see it this year—but I groaned when I got to the part of the interview in which McCartney says, of adding “Being for the Benefit of Mr. Kite!” to the setlist, that he was “happy to kind of reclaim it as partially mine.” I just want to say to him: please don’t keep pouring kerosene on those embers. Please step back and let that frustration go, because you’re fueling the dynamic that seems to keep you feeling insecure.

Here’s the relevant question and answer from the interview:

Q: What made you want to revisit those particular songs?

A: Well, for instance, “Mr. Kite” is such a crazy, oddball song that I thought it would freshen up the set. Plus the fact that I’d never done it. None of us in the Beatles ever did that song [in concert]. And I have great memories of writing it with John. I read, occasionally, people say, “Oh, John wrote that one.” I say, “Wait a minute, what was that afternoon I spent with him, then, looking at this poster?” He happened to have a poster in his living room at home. I was out at his house, and we just got this idea, because the poster said “Being for the Benefit of Mr Kite” – and then we put in, you know, “there will be a show tonight,” and then it was like, “of course,” then it had “Henry the Horse dances the waltz.” You know, whatever. “The Hendersons, Pablo Fanques, somersets…” We said, “What was ‘somersets’? It must have been an old-fashioned way of saying somersaults.” The song just wrote itself. So, yeah, I was happy to kind of reclaim it as partially mine. But like I said, you’ve got to look what you’re doing when you play that one.”

Predictably, this is the answer that generated the most comments, including plenty of attacks on McCartney as a conscienceless credit-stealer newly taking credit for a Lennon song. Actually, McCartney’s claim about “Mr. Kite” isn’t that new. In Many Years From Now (1998), McCartney says that “almost the whole song was written right off this poster. We just sat down and wrote it. We pretty much took it down word for word and then just made up some little bits and pieces to glue it together. It was more John’s because it was his poster so he ended up singing it, but it was quite a co-written song. We were both sitting there to write it at his house, just looking at it on the wall in the living room.” (318) However, William J. Dowdling’s “Beatlesongs” (1989) lists Mr. Kite as a 100% Lennon song. Lennon is quoted about the song’s coming from the poster: “I hardly made up a word, just connecting the lists together. Word for word, really.” (172) No mention of McCartney adding anything

Here’s the thing: even if what McCartney is saying is true—even if he did participate in writing “Mr. Kite” more than Lennon mentioned—I wish he would stop saying it, or things like it. I feel a great deal of sympathy for McCartney’s situation, because there can be few things more difficult than being the former artistic partner of a man nearly universally lauded as a genius and frequently considered a saint. Over the years McCartney has endured some unconscionably nasty digs (over and above deserved criticism, which he’s also received), and most of the nastiest compare him slightingly to Lennon. Hearing Lennon described, repeatedly, as the Beatles’ sole genius has to sting, especially given McCartney’s substantial, and well-documented, contributions to the band’s musical legacy. The hateful dismissal McCartney has often suffered is epitomized for me by a comment made in 2000 by “Kathleen Keplar” on George Starostin’s original “Only Solitaire” site: “Lennon was the organ grinder…McCartney was the monkey.” When McCartney gets defensive, I can see that that’s partly in response to people throwing darts.

But when he asserts that he deserves more credit, McCartney stirs up more of the same kind of attacks, and the whole cycle repeats. Here are a couple of samples from the Rolling Stone comment thread:

“John S. Damm”: “Bloody Conquistador with your boot on the throat of John Lennon’s memory, legacy and your friendship with him. What will you do now with your drawn sword Sir James Paul McCartney?”

“CBP”: “One finds sad–pathetic in the precise sense of pathos–his hopeless, evidently bottomless Sea of Insecurities. The driving force of Fab Four was murdered more than 30 years ago; yet, Sir Mega[lo] can’t quite lay to rest his juvenile credits war with a long-fallen rock-qua-social genius. Verily, methinks he doth protest too much. Too much, and for too long . . . . the more he seeks to carry the weight, as it were, the more unbearable is his specific lightness of being. Time to retire, take wing to the dacha, Macca. Turn the business over to a younger, less disingenuous tribute band. Them freaks was right…”

“LenThea”: “Amazing, Paul can’t do an interview without taking credit for a John Lennon song. Whether he contributed a word or a sentence he just can’t seem to help himself, and since John isn’t alive to counter anything he says he does it all the time. Despite his enormous talent and recognition, he still has a tremendous need to claim a bit of a John song. He has an unbelievable need to get credit, even when he doesn’t need it. It screams volumes about his insecurity and about his incredible need for recognition and reassurance of who he is. With all he’s accomplished, he’s competing with John even in death. How pathetic.”

With regret, I have to agree that McCartney’s credit-claiming is pity-inducing. It’s a mark of how badly hurt he has been, of how much he still needs approval and recognition. As much as it might smart for him to let go of such claims—and I’m pretty sure he believes what he’s saying about the songs he discusses—I think letting go is the only escape from the vicious circle of “claim credit, get attacked, feel more hurt, claim credit, get attacked . . . .”

If I had McCartney’s ear for a few minutes, I’d ask him to err more often on the side of generosity towards Lennon, and to believe that he can afford to do that. Some of McCartney’s own statements exhibit an understanding of their interdependence that shows up how unnecessary this kind of small-stakes wrangling over who wrote what is. In the last paragraph of the “John” chapter in Many Years From Now, McCartney sums it up: “A body of work was produced that I don’t believe he alone could have produced, or I alone could have produced . . . . The truth of the matter is, John and I were kind of equal. It really did pan itself out about equal. That’s one of the amazing things about it. People can say, ‘Oh, well, it wasn’t Paul, it was John, or it wasn’t John it was Paul,” but I was there know that’s not true, the other Beatles know that’s not true. So much of it was team effort, joint effort, there really was so much of it.”

Note that “kind of,” so similar to “kind of reclaim it as partially mine.” But no “kind of” is necessary in a statement about the importance of their partnership. Lennon and McCartney achieved heights together that neither could have scaled alone, and even the songs they wrote independently during the Beatles years bore each other’s marks (rare indeed is the song that had no contribution, musically or lyrically, from the other). Malcom Doney, in his excellent Lennon and McCartney (1981), expresses this reality beautifully: “They shared with Picasso, and other major artists, the ability to soak up the stimuli thrown at them by their environment: contemporary music, words, images and experiences all became re-ordered and re-distributed to spill out into great music. But it was essentially a partnership. It only really worked with the two of them. When they wrote together, sparks flew. Each with his individual genius was able to counterpoint the other, excesses held in check—a creative clash of opposites. What they produced is evidence of a pairing of minds that transcended the mechanics of the making.”

Amen. So I’d ask McCartney to let go of the “mechanics of the making.” Those pale in importance next to the fact that Lennon and McCartney consistently brought out the artistic best in each other, and that each man’s finest work was created through that partnership.