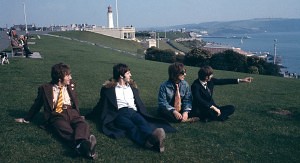 The Beatles relaxing during the filming of Magical Mystery Tour, 1967.

Oh my god, I enjoyed this documentary on “Magical Mystery Tour.” I think you will, too.

As I watched the clips, I was reminded of both The Running Jumping Standing Still Film and The Bed-Sitting Room, among other things. MMT uses the same homely vernacular you see in everything from Spike Milligan to The Pythons, and twists it in a lot of the same ways. While it’s old hat to compare MMT to Buñuel and the underground, it’s maybe fairer (and more interesting) to place it astride the meandering line of British humor as practiced post-Goons, pre-Comedy Store. After all, Neil Innes is in the goddamn thing, not Kenneth Anger.

To my American eyes it’s all so very English; English silliness, English grotesquerie, English wordplay, English subversion. (The doc mentions this last point, and I think it’s a good one.) Even the topless scene—there’s nothing American about that. Imagine such an interlude being in The Monkees’ HEAD. HEAD strains mightily to be 1/10th as interesting as MMT but fails because, surprise, all it’s really about is media culture. So American, so sterile, so utterly boring. Not their fault, but shit, c’mon, really? Here’s an idea: turn off the TV and go talk to Grandma. She’ll tell you stuff that actually happened.

I loved this documentary for the same reasons I love, oh, Ealing comedies, Jaffa cakes, the Morgan Threewheeler, to take a random core-sample of my brain at this very moment. British culture was so utterly different from what I experienced as as a child, and it gave me a feeling of such safety, such hope. From 1960-80 there was a happy collision—Americanized Englishness, or Anglicized Americanism—and each was improved. The British Invasion plus Brian Wilson equals Pet Sounds. Stanley Kubrick plus London equals…well, put it this way: Dr. Strangelove would’ve been very different if it had been filmed in Culver City. (If you’ve ever sat through The Loved One, you feel me.) That Mid-Atlantic stuff is still what gets me out of bed in the morning. It’s what I’m aiming for, always, and if I never quite make it, well, I’m just one guy. These 45 years are heavy.

Even tonight, I ached when the documentary was over, as if it were 1976 again, or 1982, or 1989—or 2012—and I was misunderstood and marooned again, back in this slick, loud, muscled-up, dumbed-down country with too many guns and insufficient appreciation for the virtues of traditional tailoring. God in His infinite wisdom has placed me in a generation that saw Kubrick and Kurosawa, and thought, “Hmm. What this world needs is Quentin Tarentino.”

And I don’t think I’m alone in recognizing The Beatles as a source of comfort. That’s something very important which The Pythons also had: to some Americans, their work seems to suggest a whole different way of living, and to us, the people who experience them only as a great song or a funny sketch are missing something essential. And both Python and The Beatles stopped performing live because the intensity of the audience’s connection was so great, it overwhelmed the actual performance. (With The Beatles, it was screams; with Python, it was—at one gig at NYC’s City Center in 1976, Cleese forgot a line and the audience prompted him, which made him wonder, “What the hell is this we’re doing?” Not unlike John and George in 1966.)

Anyway, back to MMT. Peter Fonda gets it right in this documentary: “Don’t get upset. Don’t expect something other than The Beatles. If you expect The Beatles, you’re getting them [in MMT]. Full force. They are really there, much more than in Help, or in A Hard Day’s Night, because it was their thing. They were shooting. They were deciding what to say, and what to wear. In that way it was a magical mystery tour—of them.”

And PS—Paul McCartney, if you’re reading this—he could be, you don’t know, it’s the internet, why the hell not?—you would LOVE learning improvisational comedy.

[Update August 2013: the actual film has been taken down, but here’s a preview of “Magical Mystery Tour Revisited” from PBS.]

Yes, we are perverse