Yes, we are perverse

Not only did we not do the seemingly obligatory “Paul is 70” post, we are going to share with you the following much less well-noted events: “Rishikesh George” made of felt (via Dangerous Minds)– 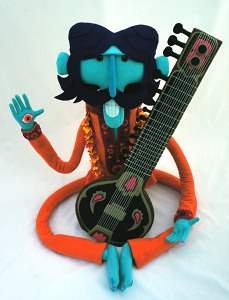 –as well as the sad news of Victor Spinetti’s death. I always feel a slight resentment towards the people of my childhood imagination when they die, but I am trying not to hold it against him. He was 82. Lord knows how old that makes me. Best not to think about it.

I met Vic once (that’s what people were calling him so that’s what I’m typing, I’m not show-bizzing you) at my beloved rep-movie theater, the Aero. They were showing A Hard Day’s Night and How I Won the War. He gave an long, pleasant interview between films. After he was finished, I pigeonholed Vic and said, “You ought to do a little ebook, just about your times with The Beatles. You’d sell a bunch of ’em. I know I’d buy one.” He looked at me and said, “What’s an ebook?” and before I could explain, the tide of fans had swept him away.

What do you want to hear?