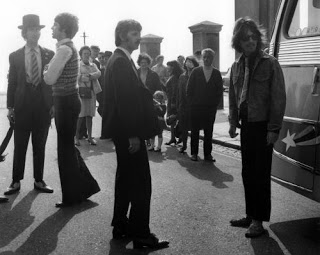 DEVIN McKINNEY  •  The news comes through this morning that Magical Mystery Tour is to be released in remastered form on DVD and BluRay on October 9 in North America, a day earlier everywhere else. The remaster is more than welcome, with the advertised extras making the Deluxe Edition compulsory for the committed. (I just ordered mine.)
There’s been talk here of the music, but I don’t remember any real discussion of the movie. What do people think of it? Anyone who hasn’t seen it? I last saw it several years ago, having purchased a legit VHS edition briefly put out by Apple (which came with some odd extras of its own, namely, a 15-minute video mostly comprising home movies shot by Paul and Mal Evans on their 1967 African safari, narrated by Rolling Stone writer Ben Fong-Torres, and a certificate of some sort, all contained in a facsimile film canister—don’t know what someone was thinking when they put that package together).
I think the film is charming, if mindless and undisciplined (yes, I know that was the point; doesn’t mean it was a good point). If nothing else, you get to see the Beatles doing silly, touristy things in pretty English coastal country; talking to children and old people who don’t seem to care that they’re the biggest celebrities in the world; and generally comporting themselves as if they were, imagine this, ordinary, everyday people. You also get primeval music videos of the Magical Mystery songs, all so odd and rich, banal yet seductive, the imagery as mysterious as the organ drone of “Blue Jay Way,” as funky and offhand as “Flying,” as hungry and demented as “Walrus.” And—you get the Bonzo Dog Band doing “Deathcub for Cutie.”
A mishmash, but a colorful one. The UK that rejected it on its Boxing Day ’67 premiere clearly didn’t quite know what it had. Then again, it was shown in black and white, a stupefying miscalculation; and just because the Beatles seem historic today doesn’t mean they weren’t deserving of the axe at the time, for foisting off what must have seemed (as it does today, admittedly though joyfully) a long session of psychedelic masturbation.
Anyway, I’m curious what other people’s thoughts are on the film, and about the upcoming re-release.