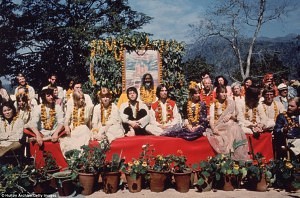 By law, this photo must accompany any article regarding the Beatles in India.

It’s always sorta been open to the public — if you wanted to give a local five rupees and sneak over the wall — but now the Indian government has made the Maharishi’s old compound in Rishikesh a tourist attraction.

In 1968, the Fab Four wrote most of the White Album while staying at the ashram located in the Rajaji national park, besides the river Ganges. Since the Maharishi left in the 1970s it has been overtaken by forest, but on Tuesday, 35 years to the day since the assassination of John Lennon, it reopened with new walking trails and gardens.

“We want to conserve the place and retain its original charm,” DVS Khati, chief wildlife warden of the state of Uttarakhand, said: “We plan to have a yoga centre here as well soon. We hope the ashram in its new avatar will give a major boost to tourism in the region.”

So who’s going? I’ll meet you there.

Sadly but not surprisingly, the Guardian article and comments are filled with Fleet Street cynicism for cynicism’s sake; needless swipes at the Maharishi, making it seem as though he ripped the Beatles off (he didn’t) and that the Fabs dismissed him as a fraud. None of this is correct.

Without a doubt, the India experience supercharged their songwriting; prior to February ’68, Lennon especially seems to have been in a dry spell (we talk about that here). Two months in India led directly to two, and more likely three LPs’ worth of material. The Maharishi could’ve charged a million dollars a head, and the Beatles would’ve still come out on top. Three of them, maybe all four, meditated for the rest of their lives. Paul and Ringo headlined a transcendental meditation concert in 2012. So Lennon dissed MMY on his way out the door — is there anyone in John Lennon’s life who escaped that treatment? 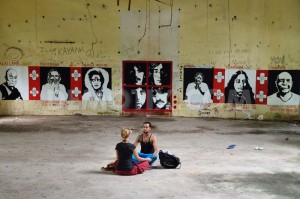 These two totally did it

Does anybody really believe that John Lennon really cared if the Maharishi made a pass at Prudence Farrow? But looking a little deeper — at Alex Mardas’ role; at John and Paul’s relationship; at John’s very likely running up against some seriously difficult personal issues in his meditation and looking for an excuse, any excuse, to get back to the West and its distractions — all that requires the troublesome “why” we’re discussing in the Yoko Problem thread.