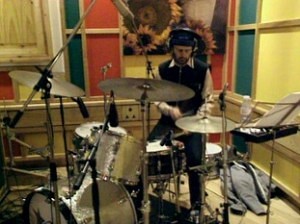 DEVIN McKINNEY  •  We all know you can take the Beatles to the outer limit and upper extremity of significance—Best thing in universal history—and then narrow that unit to its subordinate but still-impressive absolutes:  Best miracle of the 20th century; best socio-cultural force of the 1960s; Best group of the “rock era.” Having accepted all of that, you can, and we all have, then go superlative in descending levels of specificity: Best album; best song; best vocal performance—John; best vocal performance—Paul; best bass playing; best guitar solo; best everything else.

But have we gotten down as far as we can go? Is there nitty-gritty still to be mined? Yes—always.

It occurred to me the other day while driving, and really getting into some singalong energy, that Beatles music is filled with micro-moments, flutters or flourishes that last a second or two, no more. Moments that don’t even “last,” really, because they are here and gone so quickly, leaving only that silver flash of amazed memory, that dazed and dangling desire for more.

Every Beatles fan feels the importance to the group’s music of these flashes and dangles. It’s not only complete songs or albums that make their picture, it is also moments—absolute moments. There are usually no lyrics to these moments, so they don’t have to make “sense”; they require no meaning in that (non)sense. There is nothing to comprehend in them, but plenty to feel. They are accidents of an instant, or expressions of momentum, or little atmospheric explosions in the midst of a maelstrom; yet they are indubitably heard, felt, absorbed, each time one hears them. At their best—when the accident is ordained, the instant inspired—micro-moments crystalize the impact and energy of the record in a priceless noise preserved in a sliver of time.

In ascending order of favoriteness, with key points specified, these are my favorite Beatles micro-moments (click the song title to open the YouTube link in a new tab):

[Note: At some point in 2015, the conglomerate Universal Music Group made copyright claim to the Beatles’ music, resulting in the blanking of the You Tube videos linked here. Many of the official Beatles videos are now available on Vevo, but those are often different from the commercially released studio versions referenced here. But you can still play along, using CDs and headphones, and following the timings.]

Heard at 2:57. I’d understood for years that there was a muttered profanity buried somewhere in the backing layer of this, one of the Beatles’ greatest, and most pious-seeming, songs. That always sounded to me like a rumor someone felt they had to invent. I could hear the mutter, and comprehend it as a curse, but only as I could see the “black dog man” on the grassy knoll, or Beatle faces in the tree branches of John Wesley Harding: it was there if I was looking for it. Then I read Lewisohn’s Recording Sessions, and urban legend was confirmed: “Listen out for an undeleted expletive at 2’59” into the finished record!” Tastefully, Lewisohn didn’t repeat the offending phrase, but it is, as most of us know (or believe), “Fuckin’ hell.” Lewisohn did not, however, tell us who says it, or why. Is it John hitting the wrong chord? Paul hitting the wrong chord? Neil Aspinall tripping on the tea service? The curse is confirmed, but the mystery remains.

Heard at 2:16. Nancy has written movingly on this site of Paul’s gift for writing “songs of empathy.” Another manifestation of his empathy is his enthusiastic background interjections on other people’s songs. He is heard throughout this underrated tune of George’s, and at this particular moment, apex of the song’s wicked, witty buildup—a near-parody of rock intensity that is also the real thing—Paul, clearly carried away, not calculating at all, just shouts “Yeah!” and sets everything free.

Heard at 2:22. Where, instead of “gun,” John sings “gah-oh-wah,” followed by the crash of the band burning up the home stretch. Savagery, hilarity, complete commitment to sound over sense. The White Album is loaded with micro-moments; “Revolution 9” is almost nothing but. Did I tell you it’s my favorite Beatles album?

Heard at 0:01. The opening guitar note, played by George on a volume-tone pedal, is a plunging, velvety invasion, a soft hand reaching deep inside me, perhaps to remove my heart; the sharper notes that follow bring a soft sear of pain to this creepy, haunted dream.

Heard at 1:39. The harpsichord-bass figure folds inward beneath the last line of the last verse like submissive hands, or a hopeless soul: a death just as final, and far more painful, than the last chord of “A Day in the Life.”  This is a brilliant bass performance from Paul: through most of the song his notes are hit straight and clearly enunciated, but notice how on the last verse—the lyrics saddest, the death of the heart settling in—his notes melt at the edges, each descending line leaning down into the next, in a magnificently subtle rendering of sorrow and surrender.

Heard at 1:32. Far more than the orchestral buildup, Ringo’s drumming imparts doom. His fills are threatening shuffles coming from shadows, jousts and fake-outs, little acts of terror barely perceived by the oblivious singer-wanderer. So gripped by the Lennon vocal, fragile in its echoed suspension, we might ourselves fail to register the drums’ entry at the second verse. But Ringo, master “bricklayer” (in Albert Goldman’s moronic dismissal), builds on the intensity of each verse until finally, at this moment, just before the no-turning-back of the first crescendo, we hear his final fill and cymbal hit—and to me it has always been the sound of “Abandon all hope.”

Heard at 2:56. I love the modest drum “plop” that ends this record.  It’s the essence of a down-beat, a full stop, a happy gesture of depletion capping a deceptively simple number that has in fact been rising in mad energy with each verse. As a drummer, Paul had clearly learned a thing or two from Ringo. (Note that in some mixes on some records, the last chord is faded prematurely, the “plop” stop only barely audible; it’s that way on the Hey Jude album, whereas on the 1967-1970 compilation, where I first heard this song, it is fully sustained.)

Heard at 2:50. Excepting “Lovely Rita” and “A Day in the Life” (of course), the whole of Sgt. Pepper strikes me as inferior to this neglected, apparently nonsensical B-side. (Though not neglected by David Fincher and Aaron Sorkin, who made keen use of it over the end credits of The Social Network.) The Beatles are clearly deep into it, feeling their own malevolent energy, tasting the taunting lyrics, focusing their post-acid energies on a long dark studio night. The John-Paul vocal interchange on the fade rehearses for “Hey Bulldog,” with the micro-moment of Paul’s “Whoo-hoo!” taking the song into third gear just as it speeds out of sight.

Heard at 2:22. The bastardized Capitol rendering—globally despised, like everything else touched by the hands of Dave Dexter Jr.—is one of my very favorite Beatles recordings. The Capitol version adds smoggy reverb to the crazy-but-clean Abbey Road original, and lands it on another level of early-Beatles intensity. Just love, love, love, love it! Anyway, the crash-and-bang of the sound, the Gary “US” Bonds lunacy of the overall, has always deceived me into thinking there were more instruments at play than just the Beatles’ basic line-up—which of course is not true at all. But I could always swear that at this point in the song, when things are climaxing, I hear a flute. Yes, a fucking flute. I still hear it, though I know it’s not there. My mind provides me with that little extra touch of beauty, a taradiddle amid a magnificent chaos.

Heard at 3:11. Ringo crashes the cymbal right here—in the wrong place. I mean that rhetorically. It is actually the right place—just the right place—but a right place that more conventionally skilled and cliché-comfortable rock drummers would never think to reach. The chord sequence on the refrain of “Real Love” is C-Am-F-G. The cymbal crash is a classic rock signifier communicating climax and commitment, the peak point of a performance, and most rock drummers would, in Ringo’s seat, have placed it squarely at the top of the sequence, on the defining C—where it would shine like a plastic star atop a Christmas tree, or the eye at the point of the pyramid. But Ringo, gut genius that he is, hits his cymbal on the F—that is, not on the achieved peak of the base key, but on the aspiring major that springs from and leads back to it. That expands the emotional impact of the cymbal enormously: it comes when the song, and our hearts with it, are not standing on the summit but reaching for the summit, grasping upwards.

Additionally, where the rock cliché would have placed the cymbal crash upon the recovery of the C chord, and lyrically on the last iteration of “real,” Ringo’s crash coincides with the word “love.”

Dullbloggers, share your own favorite micro-moments. Only one rule: It can’t last longer than two seconds.