My Yoko Problem… and yours? 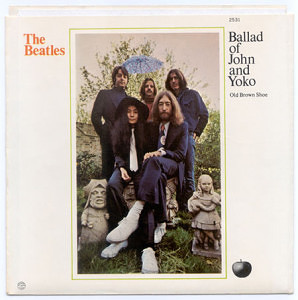 “Me and Yoko and a backing group…”

“I guess what I’m saying is, whatever the problem, it’s Yoko’s fault. A failed ‘concept artist’ took the most successful popular musician in history, by a long way, and made him think his work was shit. By comparison, it’s nothing to make him hand the keys to Klein.”

To some degree, I agree with this. John’s self-appraisal post-Yoko is so woefully off that you want to check him for a skull fracture. “Mr. Lennon, did you get hit on the head with a coconut?” But agreeing with @Sir HF placed me upon the horns of a familiar dilemma. On the chance that either you feel it yourself, or will be interested in the issue, I wanted to take a post and unpack it a little bit.

When I read stuff like this, I want to reply, “Fuckin’ A! THIS is the kind of thing we should have a panel on at Beatlefest! I will personally pay for Ann Shulgin to come and tell us whether LSD can make a person that nuts.” But if I do set that kind of tone, the level of discussion descends rapidly. Yoko is simply too divisive; she hooks into people’s personal stuff. For me, she hooks into my dislike of bullies (see also my take on Allen Klein). For others, she is a feminist icon who has had to be “a bitch” to get anywhere in a world stacked against her.

Worst of all, Yoko herself has always tried to blur the line between herself as a person, and herself as an artist. In Yoko’s opinion (and John’s), to dislike Yoko’s work is to be a racist or sexist or a square, and to like it is to sign off on John’s proclamations of her as a world-changing genius. Any discussion about Yoko immediately becomes distorted and intemperate, and that’s largely why she’s still a cipher.

The Act You’ve Known For All These Years

Nearly fifty years after she came on the scene, first as John Lennon’s girlfriend and later his wife, Yoko Ono is probably the most problematic figure in the Beatles’ story. It seems to be impossible to care about the group, and not have a really strong opinion about Yoko. Even figures at the center of the story don’t elicit such strong opinions — have you ever heard a Beatles fan say he/she hates Brian Epstein or George Martin or Patti Harrison? “That fucking George Martin with his dry English wit! What a prick!” Even in the temperate climes of Hey Dullblog, whenever Yoko is introduced into a Dullblog comment thread, steam begins to come out of people’s ears.

I did a ton of research on John Lennon’s later life for my novel Life After Death for Beginners and the reason I have not, and will not, actively promote the novel is this: John Lennon’s later life sucked. It was a really unpleasant place to be. Maybe that comes out in the manuscript, maybe it doesn’t, but I simply can’t face diving into all that again. Yuck.

It is pretty clear that the Ballad of John and Yoko was not the reality. Whether it was the outright warfare suggested by Goldman, the intermittently affectionate portrait sketched by Fred Seaman, or the peculiarly cool, almost businesslike arrangement suggested by John Green’s book, it was not your typical marriage. But it worked for them, I suppose, after a fashion, and as I’ve aged I’ve definitely come to the conclusion that a post-acid John Lennon was much too damaged to be judged like a normal person. Perhaps the very things that make me crazy about Yoko — her mania for control, her haughtiness, her aggression — are precisely what John needed in a partner, after being hollowed out by his Beatles experience. He often seemed like a snail without his shell. I’ve said more than once that I think Yoko saved John Lennon’s life in 1968…but I also think she pretty much destroyed any chance he had to become a bonafide adult. When I read about John and Yoko, I constantly had the thought, “You guys should really get divorced. Split the money however, and meet for hot hotel sex twice a year. Both of you would be much happier.”

My Yoko Problem is two-fold. The first is, once you depart from the Ballad, it’s impossible not to feel a bit angry; if the Ballad isn’t true, it’s an utterly cynical (and largely unnecessary) attempt to manipulate the public. While John has some sound reasons for doing this — he was made cynical by his Beatle experience, and needed the protection of a false image so that his real one could flourish unmolested — Yoko really doesn’t. Yoko was never mobbed by fans or prevented from living her life; she never saw how stars can either get away with murder, or lose everything for being human. For her, JohnandYoko must be a means to an end, a game, a trick she’s playing on Beatles fans, the people who pay her bills. Much has been made of Yoko’s aristocratic heritage, but she seems to lack noblesse oblige. As I’ve written many times before, it was John’s moments of humanity that made everyone love him so, and it cost him nothing. The world desperately wants to love Yoko — but she seems, as ever, only interested in people as assistants. 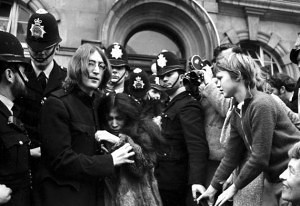 John’s own Yoko problem: Was the bust punishment for dumping Cynthia?

The second part of my Yoko Problem is this: as we’ve discussed in several recent threads, patriarchal double-standards are real, and the sexual politics of the Sixties were abysmal. Anti-Japanese sentiment was real in 1968 Britain; the Second World War was only twenty-five years in the past. The idea of a Beatle, one of our boys, dumping a nice English girl for a Japanese weirdo did offend many people for purely racist reasons. When you add this to Yoko’s other systemic hindrances of misogyny and anti-intellectualism, it is impossible not to marvel at what it must’ve taken for her to rise the way she has. Mere meme or lived reality, it was salutary to have a Japanese person become the adored wife of the Chief Beatle; meme or reality, it was salutary for John and Yoko to reverse the standard roles and have him be the househusband.

It is difficult to tease out all the various strands at work here: Yoko Ono is, in my opinion, a complex person with a profoundly unlikable personal image (she may be lovely as a person), whom John Lennon clearly loved. Or at the very least depended on, maybe to the point of her keeping him alive. She is a successful artist, interesting in her own right, who has overcome systemic racism and sexism to achieve iconic status; female artists in the generations since have frequently thought of her as a trailblazing figure. On the other hand, it’s unlikely that she would’ve achieved anywhere near the cultural significance she has, had she not married well. She is unlikable because she does unlikable things. And her relationship to John’s cultural legacy can veer strangely into frenemy status.

Yoko Ono was, without a doubt, one of the stressors that led to the breakup of the Beatles, and to claim otherwise is to ignore a mountain of first-person evidence. Paul can give her a pass, that’s his right (and she’s his business partner), but we should go where the evidence leads. At the time, she seems to have considered them all as threats to her relationship with John, especially Paul. She introduced John to heroin, an idea that must rank as one of the world’s worst ever. On the other hand, in recent years she seems to have intermittently recognized that the world’s love for her husband’s band is more important than her own multi-decade pissing contest with Paul McCartney.

For better or worse, she was the woman John picked. If she was a bad fit with the group we love, that’s ultimately on him — so much so that I believe he picked her precisely because she would break up the group. The question is, why, and that’s at the heart of what we’ve been talking about this year. How does one square the John Lennon of 1940-1967, who surely met and dismissed many people like Yoko, with the Lennon of May 1968 and after, who seemed to be a wholly owned subsidiary of Yoko Ono, Inc.? In the end, a Beatle fan’s Yoko Problem is really a John Problem, and therein lies the real rub, and why it will never go away. It can’t.

What do you think? If you want to let ‘er rip, this is probably the comment thread in which to do it.

POSTSCRIPT: Within thirty seconds of hitting “post,” I received a Facebook comment: “what a load of shit”.
Me being me, I immediately responded, “[x person], please go comment. The post is all about how Yoko engenders such passion, pro and con. If you think she’s gotten a raw deal, say why. People will be respectful.” The poster refused, saying she’d read enough anti-Yoko garbage, and that we were being removed from her feed.