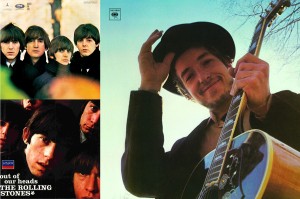 These proportions would’ve been pretty accurate I think

“In 1969, Bob Dylan had the idea to form the ultimate temporary supergroup. He wanted to record an album with the Beatles and the Rolling Stones. He told his idea to Glyn Johns, who immediately started making phone calls. Long story short: George Harrison and Keith Richards were in favor of the project. Paul McCartney and Mick Jagger were not interested. John Lennon didn’t care either way.

Today’s thought experiment: Try to imagine a parallel universe where this album had been allowed to exist (if Paul, perhaps, was stunned into confused acquiescence by a blow to the head from one of Martha’s squeak toys, and if Mick had undergone ego-reduction surgery)… what would it sound like?

At this point, the Beatles and the Stones were past their Sgt. Pepper and Satanic Majesties phase. Dylan had progressed beyond his mid-60s sound & word paintings. Would this collaboration have been a celebration (or solemn observance) of their rock & roll, blues, country and folk roots? Would it have been a hot mess or a glorious rip in the space/time continuum?”