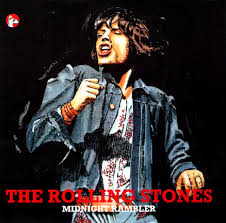 DEVIN McKINNEY  •  A friend sent this link to a Guardian article titled “31 Songs That Changed My Life,” in which a variety of English creatives (actually, not enough variety—only six are women) name and briefly describe a song they found in some way determinative of their personal development. Per the EW “best album” commented on by Mike, I don’t like such lists yet I almost always look at them. This entry caught me: #15, by Scottish crime novelist Ian Rankin:

Midnight Rambler by The Rolling Stones
I have chosen this from my favourite Rolling Stones album: I’m obsessed with them, and have used many titles of their songs as titles for my short stories and novels. “Midnight Rambler” was the first time I’d ever heard a rock group sing about a serial killer—it’s about the Boston Strangler. It was the end of the Sixties, and when The Beatles were singing “All you Need is Love,” The Stones, who were a good, liberal, rock group, were a bit more realistic.

The foolishness of this is self-evident. I take “realistic” to refer to that which touches upon reality, or at least consensus reality, meaning the reality that most humans feel they share. It is certainly a reality that serial killers exist, and that they continue to do their work—on TV shows like “The Following” and “Hannibal” and in novels like Rankin’s, anyway. But the relative percentage of humans affected in any way by serial killers other than through such entertainments is somewhere beneath infinitesimal, whereas the number of those affected by love, the concept or the thing, its presence or its lack, is precisely the number of people who have ever lived.  Not to mention the equally obvious fact that there was a world of difference between August 1967, when the Beatles debuted “All You Need Is Love,” and December 1969, when Let It Bleed appeared, with “Midnight Rambler” as a showpiece.

Yet Rankin’s is a perspective that has held sway among significant numbers of listeners since the mid-1960s, long before the Stones were singing anything as explicit as “Rambler.” Hunter S. Thompson’s famous comment was that the Beatles just wanted to hold your hand, while the Stones wanted to pillage your town—the comparison itself making it clear which pursuit Thompson, given his pathologies and his genius, found more vital, true, “realistic.” Many folks, as we know, associate realism as an artistic or philosophical value exclusively with the bloody and the ugly—or at least with their own daydreams of same; and not because horror is inherently more real than anything else on earth but because a dalliance with certain accepted signifiers of horror helps those people feel realer (tougher, cooler, more hard-boiled, less illusioned) than they otherwise suspect themselves to be.

I am confident in describing this feeling because I feel it too; I always have. And a feature of my protracted adolescence was the secret sub-feeling that the Beatles’ achievement was perhaps not as weighty as that of the Stones for exactly these reasons. As a consequence, I’ve always sought out the ugly and the violent, the dissonant and the dark, the perverse and the hidden in the Beatles’ art, partly because it interests me more to look beneath the surface than to describe what is perfectly self-apparent, and partly because like any daydreamer of darkness I feel enlivened, as if a need is being met, when I’m in some kind of imaginative touch with sensations that I find objectively unpleasant.

But damn it: You grow up eventually. Your obsessions remain but your focus spreads. You realize that horror as most of us know it (for most of us have never been touched intimately by murder or war) is just another kind of romance novel, and that an undue emphasis on the grungy and decadent is just another brand of naivete—albeit one with a hipper label. You still dally with the dark, because it is fun; because it answers that need which is still there and probably always will be; because it feels like you’re pursuing an essential part of the full human story. But you start appreciating love and hope and air and light in ways you never could before, not back when you were an adolescent whose innocence lay in his cynicism—his “realism.”

Having thus grown up and spread out, you realize yet again why the Beatles are supreme. I still love the Stones, always will. But I’ve often felt that in singing songs about sex killers and interracial whorehouses and cocaine blitzes—not to mention violent revolution, at the moment when it was culturally advantageous to do so—they in a certain sense took the easy route to mythic status. It’s never been uncool to call yourself a Stones fan. On the other hand, extolling or just entertaining the philosophical implications of “all you need is love” will almost never make you appear the hippest person in a given room. The Beatles always flirted with, and especially in the late ‘60s and throughout the ‘70s were recurrently accused of, just that kind of irrelevance—the kind that hinged on signifiers, words like “love” and phrases like “violent revolution” and quasi-ideas like “war is just a shot away,” which the Stones had up front and the Beatles merely (“merely”!) had embedded in the texture and the tragedy of their sound, a contrast in explicitness that for many meant that the Beatles weren’t as “realistic” (impossible to use that word without meta-quotes) as the Stones.

But the people saying that in the ‘60s, from the pioneering rock critics to rank-and-file radicals, were, I recognize yet again to my astonishment, mostly about half my age at the time. We may think we have it sussed out, but if life teaches you anything it’s that there are always surprises ahead, and that they will work changes on you that you can’t begin to foresee. That the Beatles only grow in stature as I age, whereas the Stones shrink to something that is often a little less than life-size, to me says a lot more about a rock group’s relevance than does that group’s willingness to write, sing, and play an eight-minute song, even a good one, about a sex killer. Meanwhile the reduction of “realism” to the trappings of violence says rather more about the listener than about the work. To travel, as Ian Rankin seems to, on the assumptions that 1) because a thing is violent and ugly it is by definition more realistic than things which are not; and that 2) creative work about that violent and ugly thing is intrinsically more worthwhile betrays, at the very least, a remarkably stunted view of what reality, without quotes, contains.