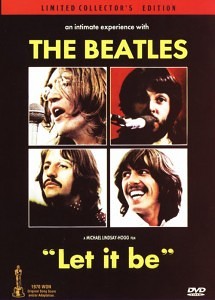 Is Mike man enough to withstand the awesome depressive POWER of this film?

Last Thursday I happened to rent a DVD of “Let It Be,” and I did so mostly out of surprise that it was on the shelf at all. I’d seen it only once before, in the summer of 1981, paired with “A Hard Day’s Night” at the pot-scented Tivoli Theatre in St. Louis. Maybe it was Lennon’s recent death, or having watched the young Fabs in full flood directly before, but I still remember the funereal aspect of the evening’s second half, something even the sweet smell of demon weed couldn’t dispel. Big, grainy pictures of the Beatles with acne, smoking endless cigs and looking bored, running through some of the weakest music in their catalog. I remember everybody leaving the theater really down. A Beatle downer is the worst kind of downer, because it suggests that nothing is immune.

But I’m a tough old meditating bird, comfortable with the impermanence of things and the unsatisfactoriness of life—was I going to let a little Beatle-dukkha get in my way? No I was not. So I popped the movie into my computer and watched it.

While it was less of a downer than I remember, I need to say something: “Let It Be” is a shitty movie. Well, okay–maybe that’s too harsh. But it certainly is a missed opportunity.

I’m not saying this because it shows the Beatles fighting—that was the kind of opportunity any filmmaker with kill for. The implosion of the world’s greatest band, right before our eyes? THAT’s a documentary! No, I’m judging it on the terms “Let It Be” set for itself—a record of The Beatles in the studio, in 1969, preparing for a performance and making an LP. In this, it fails miserably.

That story—or any other story—is never explicitly stated. We are simply plopped into a soundstage, who knows where, who knows when, who knows why. The cameras are turned towards the Beatles, and let run; no context is given for any of their actions or dialogue. No nitty-gritty planning sessions are shown; no mixing or sequencing or playback; we learn nothing about how the Beatles actually made their songs, or made their albums. We don’t see, for example, John and Paul working on anything much together; we see George and Ringo working through “Octopus’ Garden,” which wasn’t even on the album. From “Let It Be” you’d think they just played a bunch of oldies, made a couple suggestions, ran through a few new tunes, and sent the results to EMI.

It’s as if the Beatles rehearsing should be fascinating enough; and though occasionally it is (when they’re really having fun, jamming on a song), most of the time any drama is external, supplied by the modern fan’s knowledge of the chronology—what happened before and after, and what it all meant. The “infamous” exchange between Paul and George takes place mostly off-mike, in whispers, and if you were ignorant of the larger narrative, it might not even register.

There’s no sense of stakes, no beginning, middle or end. There’s no sense of goals reached (or not reached), externalized conflict, or pressure to perform (which must’ve been immense). Each Beatle isn’t sketched as a character, given his own background or desires. It’s literally just four very famous, very charismatic guys playing their instruments and saying things to each other for an hour, then they go up on the roof and play, and then it ends.

Imagine, if you will, a “Let It Be” that really delivered. And all you would have to do is structure it like a proper documentary.

[VO, with still images and footage.]
“In late 1968, the world’s most popular and respected rock group finished its most ambitious project,” says the voice-over. “Called ‘the White Album,’ it was a worldwide smash, and further cemented The Beatles as the preeminent musical talents of their generation. But the sheer effort of this two-record, 30-song statement took a dreadful toll on the four musicians and everyone around them: for the first time in the history of the group, a Beatle quit. And it was the least likely candidate, too–the drummer, Ringo Starr, the group’s peacemaker, left in July 1968, only to be wooed back with flowers. George Martin, the quartet’s longtime producer, wasn’t so easily swayed; he grew so tired of the grueling, acrimonious sessions that he eventually refused to take part.

“The expected response to such an effort–and the intergroup turmoil that surrounded it–would’ve been to rest. Take a month off, or six. But the Beatles, encouraged by the workaholic Paul McCartney, did the exact opposite: they decided to head into the studio as soon as possible, ringing in the last year of the Sixties with a new album. The album would be recorded live, with no overdubbing, to capture a raw, natural feel. There was even talk of heading back out on the road, something they hadn’t done since the days of the mania. Perhaps in small clubs, incognito, just to see if they still ‘had it.’ Or on a ship at sea. Or in a Roman amphitheater in North Africa.”

[Camera on Paul.]
Voice-Over: “So why aren’t you taking a rest? Are you afraid people will forget about The Beatles?”
Paul: “Of course not, it’s just that–we like to work. Being Beatles is what we are, y’see. We could stop for a while and say, ‘I’m just Paul for now,’ and work on–well, who knows what we’d work on, that’s the problem. We’d probably all just go on writing songs anyway.”
VO: “Do the others agree with you?”
Paul: “I dunno, you’d have to ask them. I think they do.”
[Camera on John and Yoko.]
VO: “John, do you want to do another album so soon after the double LP?”
John: “Not really. I think Paul feels the need, but I–we’re–quite busy with other things. I’m just doing a gig with the Stones, a melting of the minds which will be on a television near you someday I hope. And Yoko and I are working on several new albums, and our films, which we’ll put out eventually. And there’s sleeping, which I quite enjoy.”

And so forth. With limited voice-over to give context, cutaways to individual band members giving their opinions about what’s going on, and a chronological structure, the natural drama of the footage would be unlocked, and “Let It Be” could exist as a piece of filmmaking, not as a weird mound of cinema verité showing the mark of too many hands.

Of course, the flaws are intentional. From the moment the vibes turned out to be bad, everybody involved was scrambling to save face. It’s a movie by committee, and that’s why it’s never been re-released. But there’s a great film in there, a great documentary. All it needs is a little structure, and a re-cut, using footage we know exists, the stuff that really shows the tensions in the band, that really conveys what it was like in that room, with those people. Not Paul blinking meaningfully at the camera with his big saucer eyes, working hard to put a ballad over. That’s OK, because that’s who Paul was and is; but if you have that and not John and Yoko being their weirdo selves, and George smoldering and taking swings at John, and Ringo steadily getting more fed up—you don’t have the super-volatile, super-interesting mix of personalities and quirks that was The Beatles.

“Let It Be”‘s flaw isn’t that it showed the Beatles with their trousers off; it’s that it tried to make them all smooth down there, like Ken dolls. That’s how you turn the slow-motion implosion of the greatest rock band ever into something that wears out the fast-forward button.

This wasn’t the post I intended to write, this was what came out when I fired up WordPress. I was intending to write how odd it felt, remembering the first time I watched this movie, how they all seemed impossibly old and wise and accomplished. They were in their late 20s, and I was merely 12, and their weariness made sense to me, under such a pile of years. Now, at 44, everyone in “Let It Be” seems impossibly young, and in their actions I see all the impulsiveness of youth, and certainty, and hubris. Maybe that would’ve been a better post, but I’m too tired to write it. Which is so very “Let It Be,” isn’t it?