Kiss as the Anti- Beatles

NANCY CARR * Easily recognizable iconography is one thing the Beatles and Kiss share. The Beatles have sometimes been represented by just their hair, and Kiss’ comic-book costumes and makeup are certainly distinctive. But there the resemblance ends. Reading Brian Hiatt’s excellent article “Kiss Forever: 40 Years of Feuds and Fury” in last month’s Rolling Stone got me thinking about all the ways that Kiss is the anti-Beatles—not in the sense of the band’s being opposed to or “against” the Beatles, but in the sense of being a kind of photographic negative of the Beatles. 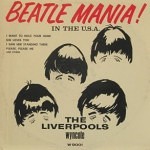 The Beatles were about evolving: Kiss is about statis. In both cases, the music and image follow suit. 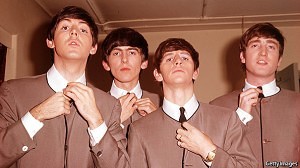 Before we change the course of popular music, let’s straighten our ties.

The Beatles as shape shifters

The Beatles’ “moptop” look of the early 1960s was phenomenally successful and widely copied. In modern terms, they had an easily identifiable, highly saleable visual brand. But they shed that look quickly. As early as Beatles For Sale they were wriggling out of it, and by Rubber Soul they had left it lying on the floor. They would play with costumes for Sgt. Pepper’s and Magical Mystery Tour, but never again would they have a stable, all-dressed-the-same image. From a branding perspective, this was madness. The Beatles’ audience stayed with them through all these changes because the shifting image mirrored the developing music. To go from “I Want To Hold Your Hand” through “Eleanor Rigby,” “Nowhere Man,” “Within You And Without You,” “A Day in the Life,” and the medley that closes Abbey Road is a crazy seven-year trip. Rather than choosing a fixed image, the Beatles created an identity out of their Protean quality. The only thing that defined their look was its changeability. 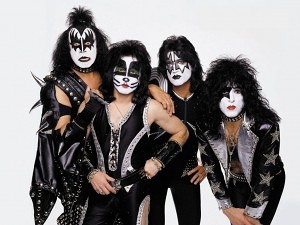 Kiss, on the other hand, developed its makeup-and-costume look in 1973, and stuck with it for the ten years that cemented the band’s place in rock history. The four characters originated by Gene Simmons, Paul Stanley, Ace Frehley, and Peter Criss appealed strongly to teenagers and made for a powerful live show. Dressed in their leather, spikes, boots, and Kabuki-style face paint, the members of Kiss looked like aliens or monsters, not like people. And the music reflected this: it never strayed far from the formula epitomized in “Rock and Roll All Night.” With the exception of the hit ballad “Beth,” there was no suggestion of depth or real-world resonance to the band’s music. Kiss’ songs were almost exclusively about partying, and their stage show was very, very good at putting that vibe across. There’s no question that the original members of Kiss earned their recent induction into the Rock and Roll Hall of Fame.

But Kiss is fixed. It’s an image above all, something the band found out the hard way when they took off their makeup in 1983. For the next thirteen years the band struggled, as Wikipedia diplomatically puts it, “with their identity and fan base.” (Also with their membership: this period saw the beginning of changes in personnel that have resulted in Stanley and Simmons being the only original members left in the band). In 1996, at the Grammys, the original members reuinited in their makeup and costumes, and there was no looking back—at least not where the makeup and costumes were concerned. Kiss could only be successful within that image. The music wasn’t powerful enough to support changes in the look. Today’s Kiss features replacements for Frehley and Criss, but uses the same characters. If you didn’t know the personnel had been changed, you couldn’t tell by looking. In Hiatt’s interview, Simmons describes the 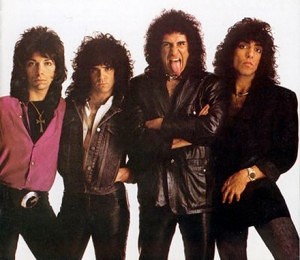 prospect of Kiss continuing after he and Stanley retire or die, which seems quite possible. With new players donning the costumes and makeup, and singing the same songs (or the same kind of songs), Kiss could still be Kiss. Hiatt succinctly sums up the marketplace reality: “In the land of merch . . . Kiss is always just Kiss. It’s the white-faced likenesses of the band’s signature characters – Simmons’ Demon, Stanley’s Starchild, Frehley’s Spaceman and Criss’ Catman – that matter, not the men behind them. So what if the actual founders of Kiss have written wildly contradictory memoirs insulting one another? Their dolls get along just fine.”

The Beatles: members, not characters

Take away any member of the Beatles, once Ringo Starr was slotted into place as the drummer, and you no longer have the Beatles. You could have a very respectable band with three or two of the members and a replacement or two, but that band would not be the Beatles. Each member had too much individuality of talent, and was too strongly identifiable as a component of the band’s musical personality, for any shuffling to work. To take an obvious example, all four Beatles sang, and the interplay of their voices is an important part of the band’s sound. Yes, even Ringo. Think of “I Wanna Be Your Man” or “Yellow Submarine.” Tribute bands can certainly copy the Beatles’ look, but even this entails multiple costume and hair changes, if the band is covering more than a single era. Imagine Please Please Me era Beatles performing “I Am the Walrus” or Abbey Road era Beatles performing “Love Me Do.” 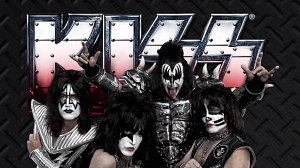 Kiss in 2014, with replacements for Frehley and Criss

Simmons spends a lot of time in Hiatt’s interview talking about Kiss’ popularity and money-making ability, but also seems too smart to believe his own schtick fully. He tells Hiatt that “all the credible bands can kiss my ass, with all due respect,” and speaks gleefully about the way open commercialism is now the rule in rock. Here’s Hiatt on why Simmons believes “his band’s values have triumphed:” “Arena concerts of every stripe, from country to hip-hop, have long since embraced Kiss’ once-derided stage tricks: pyro, stage elevators, flying musicians. No one knows what “selling out” means anymore: The Grateful Dead have an entire division at Rhino Records devoted to licensing their brand; Bruce Springsteen’s online store sells Bruce mugs and tote bags. And to Simmons’ delight, Bob Dylan (a hero who once helped Simmons write a song that he released on a solo album called Asshole) just did a Super Bowl ad. “They all come around to our way of doing it,” Simmons says. “Cherry Garcia, baby. The hippies lost. They really did.””

At one level Simmons’ logic is sound. Popular music has become less ambitious about changing the world, and musicians far less idealistic, since the hippies’ heyday. The Beatles’ disastrous entanglement with Apple Corps could be Exhibit A for showing the shipwreck that can result from running a business without hard-nosed oversight. And Kiss does have plenty of loyal fans, even if some deride Frehley’s and Criss’s replacements as “imposters.” If money and fame are what you’re after, the Kiss formula certainly works. But it all seems pretty hollow, and at points Simmons comes close to admitting it. He acknowledges that what he has are business relationships (“friendship is overrated”), and that his Kiss persona grew out of an inner despair fueled by childhood hurt. Reading Hiatt’s description of Simmons sitting in his home office surrounded by Kiss memorabilia, it’s hard not to feel sorry for the guy, however much money and fame he has.

In creating their personas, Kiss created characters that can’t grow or change. That’s the lesson of the failed “unmasked” period. The music can’t evolve, either: to be Kiss music, it needs to be about a relatively small range of subjects. To love Kiss now is either to love one’s own youth, or to be a youth with whom that music connects as it might have for the kids of the 1970s. But Kiss can tell you nothing about growing older, asking questions, or reaching for anything greater—that’s not part of the brand. 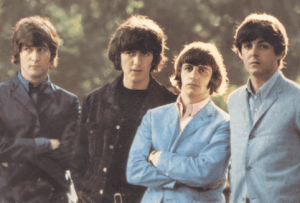 1965: Get away from us with those matching suits. Now!

The risks and rewards of choosing growth

The Beatles’ great strength was their openness to new experiences and their determination to bring it all back into their music. Nothing was to be off limits: not string quartets, not sitars, not random tape loops; not joy, despair, hatred, or confusion. No other band has produced an album that is both as varied and as consistently high in quality as Rubber Soul or Revolver, to name just two. It’s true that their openness to variety and change exacted a high price. Together the Beatles traveled far and fast both musically and personally. When their individual paths diverged and they couldn’t hold the band together any longer, the implosion was ugly and left shrapnel in them all. Patching things up insincerely, or reforming with one or two new members, wasn’t an option they’d left open for themselves. They were all four all in, all the way.

But that’s the reason we’re still listening to them, and talking about them, today. They didn’t just blow the curve for other bands, they blew up the curve itself. Despite their myriad failings as individuals, when they worked together they did the best, most authentic work they could, and damn the consequences. The Beatles’ fate as a band underlines the riskiness of committing to growth and change, rather to fixity. Their music speaks eloquently of the rewards.