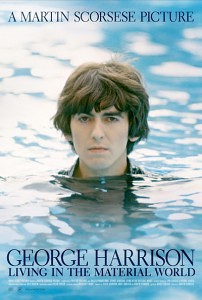 SW: At the Telluride Film Festival over Labor Day Weekend; I’ve volunteered there for 6 years. First Ken Burns came out, and gave the prelude to what the audience was about to experience. Then he introduced the film’s co-producers, George’s widow Olivia and David Tedeschi. That night was the first time that Olivia watched the documentary at a public viewing.

SW: Compelling, poignant, funny—from the first moment to the end. And it’s not short, either. It begins at the beginning, in Liverpool, and goes straight through for 3 1/2 hours. I remember at the end, Olivia said, “He lit up the room for a long time.”

HD: I remember “No Direction Home” being fascinating to look at, too. How is “Material World” visually?

SW: There are so many wonderful images, both still pictures and film. Especially of George’s early days with The Beatles. I was transfixed by George’s search for self-discovery, how it stayed with him for his entire life. His early music with the Beatles, and his post-Beatles stuff, never sounded so good or made so much sense. The early Rock and Roll songs, the iconic Beatles tunes…they filled the audience with joy. When the audience heard “My Sweet Lord,” it was really powerful.

HD: Who does Scorsese talk to?

SW: There are the people you’d expect—Paul and Ringo, George Martin, Pattie Boyd and Eric Clapton, Astrid and Klaus, Yoko Ono and Phil Spector. And of course fellow Wilburys Tom Petty and Jeff Lynne. George’s son Dhani says some interesting things, but it was Olivia who gave some of the best insights into George Harrison, the man. His relationships with his friends are to envy; they still miss him and have such wonderful, human stories to tell. But George wasn’t without flaws.

SW: Olivia says, “he loved the ladies and the ladies loved him”! They were together for 30 years, so she seemed to handle it all with grace and dignity. But even that temptation fits with the theme of the film. Martin Scorsese says, “The more you’re in the material world, the more there is a tendency to search for serenity.”

Many thanks, Shirley. I may have to get HBO for that month—is there something like Beatle Ticket? “Living In The Material World” premieres on HBO Wednesday, October 5th and Thursday, October 6th. Here’s the trailer.