Thoughts on Red and Blue? 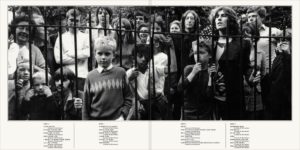 Songs from Beatlemania! Photo from 1968! AIEEEE

Robert Rodriguez, author of Fab Four FAQ 2.0, popped up on my Facebook feed this evening touting an interesting anniversary: Thirty-five years ago tomorrow, on April 2, 1973, Apple/EMI released the Beatles compilations, 1962-66 and 1967-70. Or, as they were universally called, the Beatles Red and Blue Albums, respectively.

Not surprisingly, these two LPs hit like a bomb (they’d sold 1.3 million of both sets by the end of that first year), and for lots of people, they became their introduction to the group. 1962-66 and 1967-1970 were a seminal expression of second phase Beatlemania — and they’re interesting almost in spite of themselves, because you can see the intense, immediate, emotional Beatles phenomenon starting to be transformed (perhaps even sanitized) into memory. These two double-sets were the first instance of an unexpected, intense longing for the group translating into commercial product, and that to me is the key determinant of second-phase Beatle fandom, which I’d date from these albums to the end of Anthology. (Like Anthology, they appeared in response to un- or semi-authorized Beatle content; Red and Blue were a response to a bootleg called Alpha Omega, released in 1972; Anthology was brought to life by things like the Artifacts series.)

Also not surprisingly, I’ve always hated these albums, dismissing them as potted history with a commercial gloss, and every time I’d open the first LP, that photo from 1968 was like nails on my psychic chalkboard. As if the Beatles were the same — as if the world had been the same! Even as a young pup (me: b. 1969), I felt Red and Blue were talking down to the listener somehow, serving up tunes totally stripped of their original context. How could one possibly decode them without all the circumstantial evidence? How could one attempt to return to that time, or at least sense what it might’ve been like, without the context? They were suddenly just songs; this felt to me like a diminishment, and I resented it. It was like the second side of Yellow Submarine, when a private conversation I was having with some older friends was suddenly interrupted by a bunch of instrumental crap. In the track listings, it’s Allen Klein, not Beatles or George Martin or even Brian, deciding what was the best — what was important about The Beatles, and what would last. Or maybe not even that? Maybe just what would sell best in 1973? The first set has no cover songs on it, and I think we all know why that i$.

But I knew so many people who loved these LPs, and certainly they were a huge driver of the mid-70s reemergence of Beatlemania. Anybody out there have any stories/memories/feelings about the set?

Did Monoculture Make The Beatles?

Who is Red Norvo?