Did Monoculture Make The Beatles? 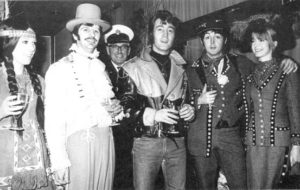 December 21, 1967: John, Paul and Ringo at the party celebrating the BBC’s transmission of “Magical Mystery Tour.”

This morning, as I was shaving — a marvelously quick operation now that I have a beard — “Breakfast With the Beatles” played a blast-from-the-past radio ad touting the then-new LPs Magical Mystery Tour and Wild Honey. (So we can date the spot to late December 1967/early 1968). I suddenly felt a very warm feeling, a pang of entirely comfortable longing. How nice it would be to hear something like this on contemporary radio, something that I understand fully, by artists I know and like, and would like to buy. This is so unlike my current predicament of feeling completely alienated from pop music — twenty years’ behind, at least, and with no great belief that time spent catching up would be rewarded.

Perhaps this warmth of mine was longing for a time when there was simply much less cultural product on offer — for media monoculture, where an individual could have some ability to judge the flow of new work as it was released by the gatekeepers. Consider the snobby record store employee or comic book clerk: consuming pop culture seems more like a job than a pastime today. Quality aside, my commonest feeling when confronted with all the new books, songs, cartoons, and various other forms is simply overwhelm. Some of this is age, but some of it is that in December 1967, there was simply so much less work being thrown up for audience review.

But the monoculture was dominated by white, male voices — both as performers, and also as gatekeepers and tastemakers — and so I’m willing to admit that maybe that radio spot was simply speaking to me in the argot of demographics. It was a stray transmission from the White Guy Era, a time when my race and gender artificially dominated the cultural conversation. Maybe that’s what I was digging, without even knowing it. But it was cozy, let me tell you.

A thought that keeps popping up on this blog over the past several years is the relationship of media monoculture and the Beatles. Would the Fabs have been as epochal in today’s media environment? Can anyone be, and is that a good thing? How much of their success and artistic brilliance comes from being heroes of the monoculture? The scene, any scene, is simply too big today for anyone to tower over it like the Colossus of Rhodes; and how much of what makes the Beatles THE BEATLES, comes down to less diversity and more focus on fewer items?