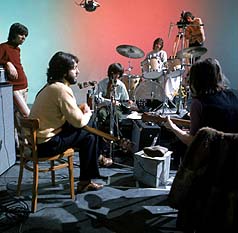 This morning, I awoke to a nice comment from Benjamin Levi Marks, the world’s pre-eminent scholar on the Get Back/Let It Be sessions. :

“Hey! Long time since I checked in. I have finally retired, which frees up a lot of time and energy. This allows me to move forward with my dissection of one month of the Beatles’ career (January, 1969). I certainly fit your blog subtitle to the ‘T’ (People who think about the Beatles maybe a little too much). Mea culpa!

Like many of us, I read and was bowled over by the book Tune In – Part One (the UK long edition) by Mark Lewisohn. I had a major epiphany after finishing volume one. I realized that the US fans (including me) missed experiencing everything that precedes the 1964 Ed Sullivan appearance. Thanks to Tune In, for the first time I was able to grasp what it must have been like in real time for British fans experiencing the rise of the Beatles. In addition, for the fans who packed the Cavern, it must have been jaw dropping to experience one of their own conquering the UK, and then the world.

I also realized that my original “Ultimate Beatles Anthology” totally missed the mark in regards to the pre-America time-period. To both help me to experience this phase of their career, and to re-familiarize myself with the software I use on ‘Get Back to Let It Be… Dissected’, I created a revised anthology. I worked on it for a year, during which time this is the only Beatles music that I listened to.

Since the book Tune In absolutely inspired this revised anthology, I titled it ‘Tune In’. It spans seven disks. As I listen to it, I imagine that I am watching some fantasy documentary that corresponds to the audio material. It has been in my mind to share it. Therefore, here it is in individual track format (the first disk):

I have not yet mentioned this on my own site, so I guess this is a bit of an ‘exclusive’ for you. I’ll upload the other six disks in the following months. That’s all for now.

Cheers to you and to all of your many readers, Ben.”

What is everybody waiting for? Go listen to Ben’s new disk. And if you want to hear his old one, I posted about it here.