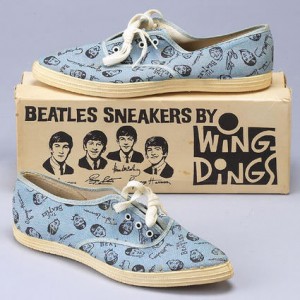 For me, Beatlemania is apparently a family trait, passed along the maternal line.

MIKE GERBER • This morning my sister Katie wrote to say that my young nephew is listening to The Beatles. So I did exactly what any of you would have: I sent along the DVD of Yellow Submarine. It was simply an expression of my sympathetic nervous system, entirely unconscious and immediate. If he likes that, maybe I’ll send him The Point.

No less a personage than Sean Lennon got his first taste of The Beatles from Yellow Submarine…or so his pop said to Newsweek circa 1980: “Last Christmas our neighbors showed him Yellow Submarine and he came running in, saying, ‘Daddy, you were singing… were you a Beatle?’ I said, ‘Well, yes. Right.'”

I have been waiting to do this for decades, to transmit Beatle-love to the next generation of Beatlemaniacs. My Aunt Mary—Mom’s sister, the proud owner of a pair of Wing Dings (mint, still in the box) which she bought in ’64, and present at what Paul called “our worst gig ever”—did it for me, so the least I can do is pass it on.

Have any of you actively cultivated Beatlemania in today’s youth? How?