Beatles Halloween Costumes? Sure there are 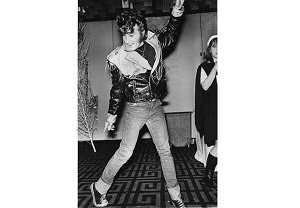 Mr Lennon, before he made my candy bag all sticky

Just a quick post before I go out trick or treating — okay, okay, I’m not quite that immature, my bank account to the contrary. I am going simply as moral support. But I do plan on plucking some winners out of the obscene haul my young friend Henry is poised to extract. Nice neighborhoods around here. Good candy. And Halloween gets a pass from the usual food Fascism practiced by so many Cali liberals — I think it’s the “gay Christmas” connection. Tonight, all the Snickers you can eat; tomorrow, it’s back to the wheatgrass colon-cleanses.

BTW, am I alone in thinking that the Lennons would’ve been a terrible place for trick or treating? “When I went to Mr. Lennon’s, he said he didn’t have any candy, so he took out a bottle of honey and squirted it into my sack. Then he asked me, ‘Do you know who I’m dressed as?’ and when I said ‘Elvis Costello?’, he shouted, ‘Fuck off, you little shit,’ and slammed the door in my face.” 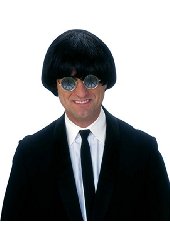 Of course one can go dressed as a Beatle for Halloween, and I’m sure many of us have. I never did, because in my family it was never safe to express one’s deepest desires too openly. That’s sort of a shame, because my mother went to art school and makes Halloween costumes like Warren Buffett invests money. The woman should work in Q Branch — only if she did, all of James Bond’s gadgets would involve toilet paper rolls and construction paper.

But are there commercial, buy-n-wear, Beatle getups? Of course there are. Fifty years on, Beatle wigs still sell, perhaps just to torment Brian Epstein’s ghost. But let’s be honest, those are as half-hearted today as they were in 1964.

We’ve never talked about this on Hey Dullblog, but Beatle wigs suck. They are the absolute worst thing in all of Beatle fandom. Even more than that, a Beatle wig is a risk. People might not get the joke. They might just think you pissed off your barber or have some sort of rare blood disorder that turns your hair the texture of rayon.

Points for jauntiness, but a good costume shoudn’t need a Strat for people to know what it is

The costumes are no better. They come in two flavors: the Pierre Cardin look-a-like in gray poplin, and the satin Pepper-era getup. And this, to me, shows what civilians remember about The Beatles: the moptop era, and the Pepper one. After ’68, no — and that’s interesting to me.

Also interesting is the omnipresence of Lennon National Health-style eyeglasses, even on the Pepper costume. If you go dressed in satin as Pepper-era John, you have to grouse constantly and remind everybody “there’s no concept, it’s just a bunch of songs. And I wrote all mine at the last minute, because as usual Paul brought in a whole stack and…”

The Best Beatles Halloween Costume I Never Did

Back when my small black cat Fifi was alive, I always dreamed that one year she and I would go as Chief Blue Meanie and Max. That was pretty much our relationship every day, manic mastermind and faithful servant. I felt that walking around as the CBM — post-transformation, of course, studded with pink flowers — would be the best way possible to announce our love. My wife was fully in favor of this plan. 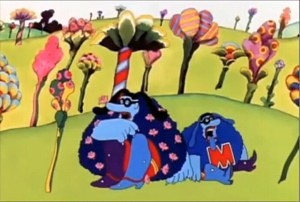 Artist’s rendition of me and Fifi

This is the first Halloween in twenty years Fifi and I won’t spend together — or maybe we will? After all, friendly ghosts walk on Halloween, too.

Strangely, Beatle is the only profession which doesn’t seem to have a sexy Halloween variant. What would a “sexy Beatle” costume look like? The mind reels. If I start planning now, the Kickstarter will be ready by next Halloween.