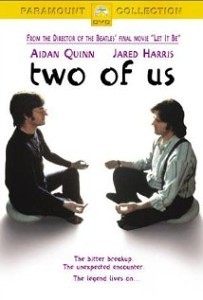 …and so began the Tantric Sex Scene.

Commenter Karen pointed me to this interesting interview with Mark Stanfield, the screenwriter for “Two of Us,” the film that portrays a fictional 1976 reunion between Lennon and McCartney. Stanfield’s interlocutor is Martin Lewis, whom I used to see regularly at Beatle- and Python-themed events all over Los Angeles. I spent the evening of my 40th birthday listening to him tell tales of Peter Cook.

The interview meanders, especially at the end, but there are lots of bits worth reading and pondering over. This sentence jumped out at me, in light of all our recent Blackpool Choice talk:

“I knew that John’s painful childhood would play an enormous role in the way I portrayed him, that he would be seen as never having completely come to terms with being unwanted. And I knew that I wanted to get across how much Paul really loved and understood John, which, I believe, is what frightened John.”

Later, Stanfield says he envisioned Two of Us as “an indie film, something like My Dinner with Andre meets A Hard Day’s Night. It didn’t even occur to me that there might be a place for it on TV.” Today, TV is the first place you’d go; witness 2013’s Behind the Candelabra.

I blush to admit I’ve never seen Two of Us, even though I’ve heard some good things. I’m actually a bit frightened to watch because — as I can personally attest — writing something that’s meant to be John or Paul and not getting it exactly right produces a cringeworthy effect. Is it worth it? Should I take the plunge?