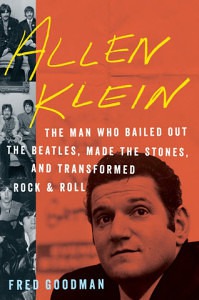 No, no, he was really a nice guy, says the authorized biography

Frequent commenter and house historian Ruth has sent in her review of Allen Klein: The Man Who Bailed Out The Beatles, Made the Rolling Stones, and Transformed Rock & Roll. Written with Ruth’s trademark incisiveness and interest in Beatles historiography, it is posted below — with our deep thanks.

By the way: there is much too much Beatle-related content being produced for us to keep up. I am growing mildly alarmed at the many worthy books, reissues, etc, that come and go without our making any comment. Any readers who would like to review books or other releases (for example, the recent “1+”), please feel free to get in touch.

Since 1973, when John, George, and Ringo refused to renew Klein’s contract and then sued him, one of the few things most Beatles authorities have been able to agree on is that Klein was the wrong choice to succeed Epstein. Thanks in part to the post-breakup agendas on both sides of Beatles historiography, Klein has become, as writer Peter Doggett noted, demonized to the point of caricature: “Nobody in the Beatles milieu has received a more damning verdict from historians than Allen Klein.” Many of the obituaries following Klein’s 2011 death reinforced this.

These obituaries prompted the Klein family to open their personal and legal archives to Rolling Stone journalist Fred Goodman, who attempts to provide a more balanced view in the new biography, Allen Klein: The Man Who Bailed Out the Beatles, Made The Stones, And Transformed Rock & Roll. However, Goodman is only capable of doing this by overcorrecting in the opposite direction: adopting the lazy and errant strategy of omitting known evidence, providing only Klein’s view of disputed events, diminishing Klein’s most significant managerial errors, and failing to ask essential questions.

Goodman makes two major arguments regarding Klein: one as a person, another as a businessman. In his personal life Klein, because of his traumatic childhood, was incapable of letting people go, being left alone and behind: like Lennon, the Beatle with whom he closely bonded, he was irreparably damaged by his upbringing. In business, Klein could be crooked, but no more so than any of his counterparts, and was better than most at ensuring large initial contracts, antagonizing record companies, and fostering viscerally personal, emotional relationships with clients. 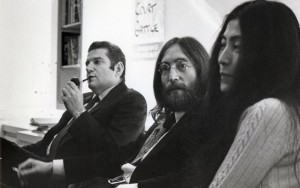 If you don’t know who the sucker is, it’s you

However, Goodman’s failure to explore the dynamics of these close, personal relationships is one of the book’s great weaknesses. Particularly shocking is Goodman’s overall lack of interest in Klein’s relationship with the Rolling Stones. The collapse of the Klein/Rolling Stone partnership is described in uninterested, bloodless terms; Goodman seems to believe that, having attained the Beatles, Klein no longer feared losing the world’s second biggest band — an argument that contradicts his own conclusions regarding Klein’s “all consuming fear of abandonment.” In his Beatles coverage, Klein’s relationship with John is the most in-depth, and Goodman argues that he genuinely admired and loved Lennon. However, while Klein initially saw himself as George’s champion, he eventually viewed George as ungrateful, and his relationship with Ringo receives little attention. The book displays an inexcusable lack of interest and analysis regarding Klein’s relationship with Paul, and neglects to address why Klein, who had spent years desperate to manage the Beatles, immediately adopted such an antagonistic approach towards the Beatle who had written or co-written the band’s most profitable songs. While Goodman acknowledges multiple times that part of Klein’s managerial strategy relied on bullying, (and Glynn Johns recalls witnessing Klein attempting to bully Paul) he never discusses how this tactic, along with Klein’s overt favoritism for John and Yoko, increasingly fueled Paul’s refusal to deal with Epstein’s successor.

In order to support his argument that Klein was not the villain he has been portrayed as, Goodman dismisses the major charges against Klein’s reputation, including the Cameo-Parkway stock inflation scandal and, most notably, Nanker-Phelge, which he portrays as a legitimate attempt to establish a tax-shelter, rather than an accountant’s trick to control the Rolling Stones catalog. He maintains that Klein’s insertion into the “My Sweet Lord” lawsuit was an attempt by Klein to woo George back, rather than punish him for leaving. In his coverage of the Beatles trial, Goodman attempts to excuse John, George and Ringo’s signing contracts changing Klein’s commissions without notifying Paul but fails to address the issue’s legality. Klein’s massive failure regarding the “Concert for Bangladesh” — that he didn’t declare a charity before the concert — is shrugged off, despite Klein’s error tying up millions of charitable dollars for over a decade.

Pushing his version requires Goodman to ignore certain facts, such as John and Yoko’s heroin use, which is never mentioned, or his analysis of their first meeting with Klein, where he ingratiated himself by going through the Lennon/McCartney catalog. Goodman anoints Klein’s attributions as accurate, despite Klein’s later revelations that he was the one who, at that meeting, “reminded” John that John had written 70% of “Eleanor Rigby.” He maintains that Paul and George’s November 1970 meeting, where Paul pleaded to be released from the partnership, ended “amicably,” with a good chance they could work out the managerial issue in January, never mentioning George’s final words on the subject — “You’ll stay on the fucking label. Hare Krishna” — which were far from amicable. After spending chapters emphasizing the intimacy of Klein’s relationship with John, George, and Ringo, Goodman argues that they eventually left him solely because of his failure to reach a proper settlement with the Eastmans.

Vilifying Klein is too easy: it doesn’t cost a Beatles fan, or writer, anything to do it. However, Goodman’s portrait, while providing some much-needed nuance to a well-worn caricature, overcorrects, omits, excuses, and ultimately stumbles. Despite Goodman’s attempt, Beatles historiography’s best evaluation of Klein is still found in You Never Give Me Your Money: a more comprehensive, accurate portrait will have to wait.