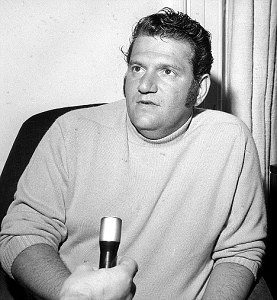 Commenter @ChelseaQW sent in this interesting tidbit this morning, which I just had to share. It’s from Allen Klein’s November 1971 interview in Playboy magazine:

VETTER: You make it sound as if they [John and Paul] were never really close.
KLEIN: I can only tell you what John said when I asked him who he would call among the Beatles if he was in trouble—you know, if he had a real problem. He said he’d call George. That surprised me. Then I asked him if he’d ever been really close with Paul and he said no. Not that he didn’t love him; he did. He just said every time he let his guard down, McCartney hurt him.
VETTER: Did he say how?
KLEIN: Not specifically. But you know, it’s the kind of hurt where you open up to someone, really reach out, and then they’re just not there. A couple of times I thought Paul and I really had something going and then the next day, it was like it all just slipped away.

— Allen Klein, Playboy: A candid conversation with the embattled manager of the Beatles. (November, 1971)

Now, naturally, this interview was conducted at least three months, and possibly closer to six, before the publication date.

“So what do you think?” ChelseaQW wrote. “Was Paul emotionally unavailable for 12 years? Or was John the neediest person on Earth? 🙂
Is Allen Klein the devil?”