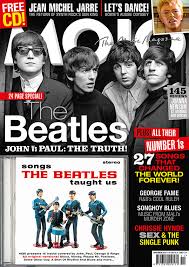 Over on the “Paul’s Essential Elements” thread, in response to an excellent post by Chris Dingman, we’ve been having a fascinating conversation about what both Lennon and McCartney brought to their artistic partnership. We’re also having a conversation about it over on Mike’s post, “John Lennon: Man of the Decade,” because that’s how we roll on Dullblog. In writing a comment on Chris’ post, I mentioned that I’d read a magazine article in which McCartney identified Lennon as his hero. It was in the November 2015 issue of Mojo, in a piece titled “The Two of Us,” excerpted from Paul du Noyer’s book Conversations with Paul McCartney. Here’s the opening of the piece:

I sit with Paul McCartney as he completes a questionnaire for Mojo magazine’s All-Time Heroes issue, in 2001:

Who is your hero?

When did this person first have an impact on you?

At Woolton Village Fete in the year of Our Lord Whatever.

What is it that you admire in them?

Have they had an influence upon you?

Have they ever disappointed you or has your admiration ever faded?

Yeah, from time to time, when we were having a barney. But only infrequently.

And here’s Du Noyer on the Lennon/McCartney partnership:

Their talents, in the years they worked together, were not only complementary, they were equal. Each man had his precise counterweight in the other, and the fine adjustments of that balancing seemed to create a dialectic of genius. As fellow Beatles their relationship was both collaborative and competitive–whether writing alone or in a team, they raised the collective game.

Du Noyer also imagines, in response to a magazine prompt, what might have happened if John and Paul had not met. Here are some excerpts from his account:

I see George Harrison, who has become a bus driver like his father before him . . . . “he farther one travels’ he says to Big-Nose Ritchie the bus conductor, ‘the less one knows.’ The stolid Ritchie nods, and drums a paradiddle on the canteen table. Life has been a mild disappointment for him since Rory Storm & the Hurricanes played their last Butlin’s summer season in 1966.

. . .  in a bar on West 72nd Street, a drunken Scouse seaman called Johnny Lennon swears contemptuously when the flickering TV shows images of the ever-popular Paul McCartney Dance Orchestra. He gets into a fight with a moody guy from the New Jersey haulage firm of Springsteen & Son, and both are evicted.

And a few observations from me: 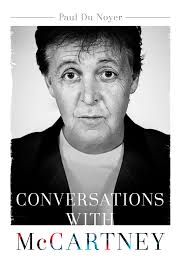 I think McCartney is sincere when he identifies Lennon as his hero. He knows he needed Lennon’s daring and disdain for convention — that without that impetus, he would never have achieved what he did. And I believe he never stopped loving the man, despite the harsh words they exchanged over the years.

I find Du Noyer’s vision of what the four Beatles would be doing if John and Paul hadn’t met up at the Woolton fete plausible. It’s telling that in Larry Kirwan’s Liverpool Fantasy and Mark Shipper’s Paperback Writer, McCartney becomes a successful, conventional musician, while Lennon struggles with alcohol and can’t fit into a social role.

We’re profoundly lucky that Lennon’s daring and determination kindled McCartney’s ambition, and that McCartney proved uniquely able to foster Lennon’s talent while developing his own. That’s why, almost 59 years after that fete in Woolton, music magazines are still featuring the Beatles’ picture on their covers.