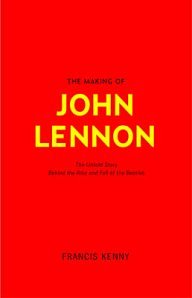 Now here’s a book for Dullbloggers!

After all the breath expended on the topic of John Lennon — a large cloud of it by the man himself — I’m dogged by the persistent feeling we’re no closer to finding out what really made him tick. But there’s a new book on Mr. Chief Beatle that approaches him from two new, and potentially very fruitful, directions: his hometown, and his relationship with Aunt Mimi.

Francis Kenny’s The Making of John Lennon is an “investigative biography” which attempts to untangle some of the knottiest strands of Lennon’s personality, and place the man in the Liverpool of his time. According to the book’s introduction (written by Bill Harry), The Making of John Lennon is “a carefully prepared examination of his early years, slowly examining the general picture that surrounded John’s life, rather than focusing on one specific aspect, wrapping the surroundings of the city, the family, the friends, the music and the events which forged [Lennon] into a whole.” Kenny’s a lifelong Liverpudlian of a certain age, so he should have a lot of interesting things to say in this regard.

But here’s the really interesting bit: Kenny heads right for the economic and class issues that most authors fudge — and that apparently drives the book straight into Mimi Stanley. In most Lennon bios, Mimi does exactly two things: play the sensible foil to Julia’s wild child, and drop bitchy, reverse-prophetic chestnuts like “A guitar’s all right, John…” Yet according to Kenny, “Mimi’s influence is… the key to John’s path in life and his creative output.” It’s a fascinating idea, and one well worth exploring. 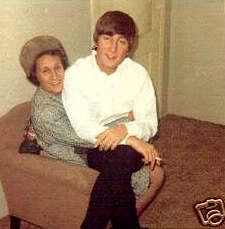 The Making of John Lennon…Aunt Mimi?

It’s specifically the tension between the conservative, almost parsimonious worldview Lennon clearly absorbed from Mimi (really evident in his 1980 interviews) and the wild, working-class pleasures of rock ‘n’ roll, that Making purports to address. The man who wrote “All You Need is Love,” not to mention “Woman is the Nigger of the World,” also could bust out a kind of back-fence bourgeois cynicism that always jars. People surmise it’s from getting screwed (Seltaeb or Klein) or Yoko’s influence, but it sounds too small town for that. The obsession with putting the other Beatles in their place, for example. During the early 70s fight, Lennon’s determined to make Paul and George come ’round the back.

Is there really any difference, how Lennon used it, between “artist” and “aristocrat”? Not to my ear. Yet I think he really did believe in equality, universal brotherhood, feminism, et al. Lennon was a contradiction in this regard, always knew it, and never really resolved it. Which is hardly a capital offense — therapists gotta eat, too — but what was a strictly personal issue in 1980 is now rather important for the rest of us, due to the Lennon Brand’s vast cultural footprint.

Just what are we saying with that Lennon t-shirt? Was Lennon authentically countercultural, even radical as is sometimes claimed — or was he really a well-mannered boy from the suburbs? Could he somehow be both out… and in? And if the person couldn’t, what about the icon? It’s one thing to get up in arms when right-wingers try to co-opt Lennon for causes that he almost certainly wouldn’t have approved of; but they can only do that because we’re not sure who he really was. (Because, maybe, he wasn’t so sure himself.) If The Making of John Lennon helps solve that, it’s a welcome addition to the canon. 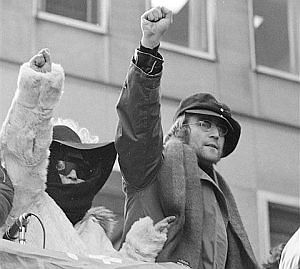 This morning, I saw that a boutique in the fancy strip of shops near my apartment has reprinted the lyrics to “Imagine” as their holiday window decoration. For a cultural icon of that magnitude, this kind of “investigative biography” is not only warranted, but important, and well past time.

The book’s website is here. Anyone who reads it, please let me know what you thought. If it passes muster, perhaps we could send some questions for Mr. Kenny. It’s an intriguing take on a ever-fascinating subject.