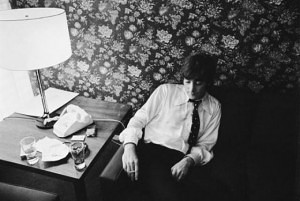 Lennon, in a pensive moment

Attention all armchair Lennonologists: Commenter Karen recently discovered a therapist with an interesting angle on what made John Lennon tick. “Having worked with families with children who demonstrate attachment disorder,” Karen wrote, “I’ve long hypothesized that much of John’s behavior can be explained by the attachment process gone awry.”

Anyone who studies John’s behavior in any depth is struck by its changeability. In the words of this therapist, “One minute soft and tender.  In a blink, harsh and cruel – with a legendary acid wit that didn’t seem quite as witty when it was turned on you.” How Lennon’s biographers handle this is fundamental to their view of the man; what demonizer Albert Goldman called “a classic case of multiple personality disorder,” fan Tim Riley dubbed “Lennon’s bipolar muse.” It’s something no biographer can ignore, and no serious fan, either.