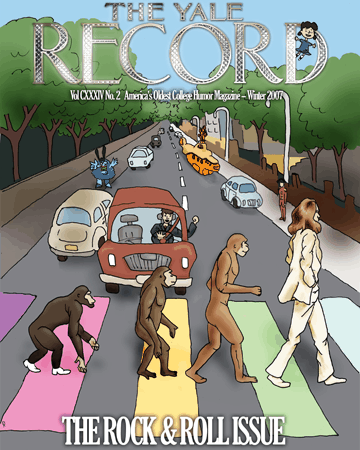 I‘m still collecting my thoughts about The Fest for Beatles Fans, but in the meantime wanted to pass along this hilarious quote from our own John Lennon. I was editing a humor piece for a friend of mine, and went to Wikiquote to confirm that Lennon did in fact say, “There are no problems, only solutions.” (In the piece, I attributed it to Vince Lombardi — a little Easter Egg joke for Beatlepeople.) Along the way I found this priceless snippet of John Lennon on evolution:

Nor do I think we came from monkeys, by the way… That’s another piece of garbage. What the hell’s it based on? We couldn’t’ve come from anything–fish, maybe, but not monkeys. I don’t believe in the evolution of fish to monkeys to men. Why aren’t monkeys changing into men now? It’s absolute garbage. It’s absolutely irrational garbage, as mad as the ones who believe the world was made only four thousand years ago, the fundamentalists. That and the monkey thing are both as insane as the apes standing up suddenly. The early men are always drawn like apes, right? Because that fits in the theory we have been living with since Darwin. I don’t buy that monkey business. [Singing] “Too much monkey business…” [Laughing] I don’t buy it. I’ve got no basis for it and no theory to offer, I just don’t buy it. Something other than that. Something simpler. I don’t buy anything other than “It always was and ever shall be.” I can’t conceive of anything less or more. The other theories change all the time. They set up these idols and then they knock them down. It keeps all the old professors happy in the university. It gives them something to do. I don’t know if there’s any harm in it except they ram it down everybody’s throat. Everything they told me as a kid has already been disproved by the same type of “experts” who made them up in the first place. There.

This was edited out of the Playboy interview done with David Sheff in September 1980 (published December 1980). It was included in the book-length transcript, “All We Are Saying,” published by St. Martin’s in 2000. Here’s an interesting article on Scheff and Lennon, done by NPR in 2010.

Here’s where I usually attempt to open up John Lennon’s head and get inside, but instead today I’ll just say this: one of the things obscured by the world’s grief over John Lennon’s murder was how strange a guy he was. At places like The Fest for Beatles Fans, there’s an almost palpable sadness over the long, contented life we imagine John lost — but the future we fans imagine for him has everything to do with us, and little to do with him. Lennon’s was not a white-picket-fence life, or mind, and his murder spared us watching him (for example) give $10 million to prove the existence of a face on Mars. “Look, Yoko’s been saying that for 20 years, but because she’s a woman, nobody listened to her. Now this NASA guy says it, everybody’s all the sudden, ‘Oh, face on Mars, face on Mars.’ I’m glad everybody’s finally coming around. The picture is there, it’s indisputable. And those are only the ones they’re letting us see!… So the album has a double point: one, to wake everybody up to the reality that some of us have been living for years, and two, to give Yoko her rightful credit.”

Losing John Lennon when we did, in the way we did, allows us to imagine whatever future he would’ve liked if he were us. But if he had lived, it strikes me just as likely that he would’ve gotten into Scientology or championed the anti-vaxxer movement or turned up dead at Burning Man under mysterious circumstances, as the more benign cuddling-with-Yoko-in-Ireland futures we usually imagine. John Lennon was not likely to become the world’s gentle countercultural grandpa. He would’ve gotten into plenty of trouble, done plenty of stupid things, and been just as divisive at 70 as he had been at 30. He would’ve followed the rest of the counterculture into the wilderness, and probably come out much like Paul, George, and Ringo did — an eccentric billionaire with a fundamentally unknown personal existence, and a penchant for flashing the peace sign.

It’s cold comfort indeed, but Lennon’s death at 40 allows Lennon fans to delude themselves about who he really seems to have been — not just (as a friend of mine recently put it) “a thoughtful seeker,” but an irritant, a holy fool, and instinctual provocateur. A man who didn’t give a damn what people thought, for better (which we remember) and worse (which we too often don’t).