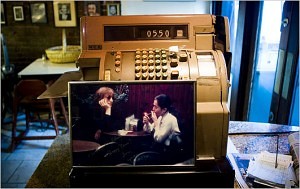 Back when smoking was a thing people did in cafes.

This morning, as I tried to get over not being able to afford Kenwood, I found a couple of videos to share. From WNYC, here’s “John Lennon’s NYC”—a great little video showing the Lennons’ local pharmacy, Cafe La Fortuna, 105 Bank Street (just around the corner from where I used to live!), and Madison Square Garden.

For some reason, I love the idea of John Lennon chatting with his pharmacist. “Do you have any natural alternatives to Pepto-Bismol?”

What other NYC venues should they have investigated? Smith’s Bar? Do any of you recall the health food stores John used to frequent? (“Do you have any natural alternatives to Red Zinger tea?”) 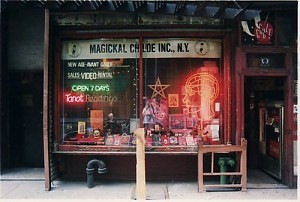 I don’t think I ever stumbled in here, but I might’ve. “Do you carry bootlegs?”

I must admit I was looking forward to seeing at least one thing a little racy—a shot of “The Magickal Childe” perhaps, or maybe even that notorious Korean brothel on 23rd Street. John Lennon’s New York City was for sure quite a bit less tame than what we’ve led to believe, especially when he and Yoko lived down on Bank Street.

And if you don’t like that, here’s a squib about “John Lennon’s Camera”—a Pentax which he may or may not have used to snap the cover of Two Virgins.