Those videos of Beatlemania girls screaming have have always made me squirm. All that howling, weeping, and writhing bug me for multiple reasons. As a woman, they make me cringe because rock criticism defined itself against them: screeching gals over there, analytical guys over here. As a Beatles fan they make me wince because they (superficially) reinforce the argument made by many non-fans that the Beatles “were just a boy band.” At a time when Why-Can’t-The-Boomers-Just-Get-Over-The-Beatles-Already is a definite thing (see this Washington Post piece), it’s worth asking: Really, why all that screaming? And why should any of us post-Boomers care? 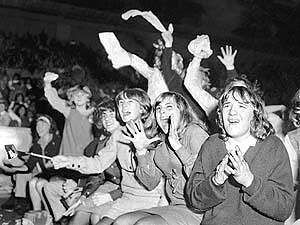 Measured at up to 114 decibels, girls screaming for the Beatles could have drowned out a 707 in full flight (100 decibels).

One good reason is that Beatlemania allowed young American women to be major players in a cultural drama. The teens who shrieked for John, Paul, George, or Ringo were learning that their desires could matter on a public scale, and later in the sixties that would start changing gender dynamics in ways we’re still adjusting to.

It is a truth almost universally accepted that the Beatles sparked a revolution among U.S. youth generally. Snarky press comments about the Beatles’ hair and the alleged awfulness of their music are more than just markers of  the wide taste divide between young and old(er). They’re signs of real fear, because it was obvious that something huge and irreversible was happening. The sheer force of audience reaction to the Beatles suggested the release of an enormous amount of pressure: it was as if teenagers were being blown out of the pressurized cabin of mid-century America into space.

But the girls were in the lead. I’m not downplaying the love of many boys and young men for the Beatles’ music, or the influence the Beatles had on getting many to try to form bands of their own. But the Beatles’ influence on girls was different – they screamed louder, they cried, they let go with a velocity that terrified many adults.

The best analyses I’ve seen of this phenomena are Johnathan Gould’s, in Can’t Buy Me Love: The Beatles, Britain, and America (2007), and especially Susan J. Douglas’ Where the Girls Are: Growing Up Female with the Mass Media (1994). Both make the point that Beatlemania gave girls license to act out their emotions before an audience, and that this acting out was much more complicated than the stereotype of sex-starved teenagers that was the ready answer given by magazine pundits of the time. Gould writes that “screaming set a lofty standard of participation. It was emphatic. It was physically and emotionally cathartic. And it soon dawned on these girls that there was no effective way for anyone to stop it.” (183) Those screaming girls had seized power, and they knew it.

They were the reason the Beatles couldn’t hear themselves on stage.

Douglas, herself a Boomer and Beatle fan, puts it more strongly: “in Beatlemania the seeds of female yearning and female revolt germinated with the speed of those exploding flowers in time-lapse photography.” (118-19) There was plenty of submerged yearning and revolt in girls, because the acceptable face of young female assertion in early 1960s America was “perkiness” (Douglas cites Gidget as a leading example). Beatlemania  was a godsend to girls, since it offered the “flip side” to perkiness:

“Everything that perkiness disguised and repressed—sexual energy, impudence, rebellion against adult authority, a defiance of traditional gender codes, and a howling sense of outrage—all these hysteria unleashed. And it was our overpowering identification not with celebrity girls but with four young men from Britain that showed what could happen when containment and repression fail.” (112)

The Beatles and Androgyny

Clearly sex was a big part of it. The sexual attraction the Beatles exerted is obvious, but it was their sexual ambiguity that most disturbed adults. Looking back, it’s hard to believe the Beatles’ mid-60’s hair was seen as long or that they set off “are-you-a-boy-or-a-girl” alarms in adults, but it was and they did. Soon after  the Beatles’ appearance on “The Ed Sullivan Show,” Dr. Joyce Brothers wrote a piece called “Why They Go Wild Over the Beatles” that pointed out that girls grew wildest for “a few mannerisms which almost seem a shade on the feminine side, such as tossing of their long manes of hair.” Douglas offers a substantive analysis of what that hair tossing meant to the watching girls:

“They . . . perfectly fused the ‘masculine’ and ‘feminine’ strains of rock’n’roll in their music, their appearance, and their style of performing. It wasn’t just their long hair, or Paul’s eyelashes, the heels on their boots, or the puckish way they clowned for the camera. Without ever saying so explicitly, the Beatles acknowledged that there was masculinity and femininity in all of us, and that blurring the artificial boundaries between the two might be a big relief.” (116)

In sum, Douglas sees the Beatles as “a Trojan horse, smuggling androgyny, a contempt for middle-class conventionalism, and sexual release into their protected, middle-class worlds. The Beatles insisted that all kinds of barriers could be finessed.” (117)

One of those barriers was the one between masculine assertion and feminine submission. If the Beatles could encompass both genders in their music and performance, maybe the audience didn’t have to come down absolutely on one side either. In fact, it was even possible for a girl to imagine being a Beatle herself: 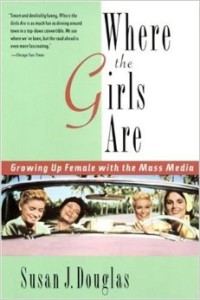 “In these boys were glimpses not only of a new masculinity but also of the best part of 1960s adolescent femininity—an eagerness to reach out to others, a faith in love, a believe in progress, and a determination to leave behind hoary conventions about staying in one’s place.” When girls chose their favorite Beatle, it was often the one “they themselves most resembled, either physically or as a personality type. Through this powerful identification with John, Paul, George, or Ringo, you could, on some semiconscious level, become a Beatle yourself, part male, part female, out in the world having fun.” (119-20)

Now when I see footage of those screaming girls, I think about the inner frontiers they were crossing, if only in their imaginations. It’s no wonder that pundits like William F. Buckley got so exercised about Beatlemania—they intuited that girls, once broken free, wouldn’t be held back by social convention for long. And about that, the pundits were right.

Thanks to Chelsea, Karen, Ruth et. al., whose comments inspired me to post this piece, which had been languishing as a draft for some time.