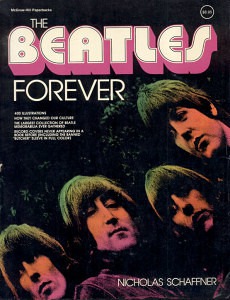 I read this book until it fell apart. I still have the pieces on my bookshelf.

Commenter @ChelseaQW said something in our gargantuan thread today that really resonated with me. I wanted to surface it in a post, on the off-chance it resonated with some of you.

“Traditional Beatles fandom (and ‘journalism’) is SO dominated by straight white male baby boomers and — with all due respect to everyone involved — I am soooooo tired of hearing that stale perspective, over and over again.”

The editor in me is very, very proud of this comment; much of my interest in the “Were John and Paul Lovers?” post  was highlighting my sense that the Beatles seem to mean very different things to fans of different identities, in the hopes that readers would take the ball. And you have!

This is, IMHO, excellent news for all fans of the music — the psychic mutability of the group suggests that the Beatles phenomenon will last, long after things like Jann Wenner and Apple Corps are gone. “Where John and Paul Lovers?” is by far the most popular post in the history of Dullblog, which to me suggests that the flexibility and universality of the Beatles and their story seems to be what Beatlefandom is about right now. The Beatles forever — but whose Beatles, and for what?

Over the weekend, Kate and I listened to a marvelous episode of “You Must Remember This,” Karina Longworth’s wonderful podcast about lost and forgotten history from Hollywood’s first century. The episode was called “The Lives, Deaths, and Afterlives of Judy Garland,” and described (among so many other things) how gay fans turned this consummately talented performer wrecked by Hollywood into an icon which was deeply meaningful to them, useful and comforting and even political. If you have any interest in the topic, I highly encourage you to listen to it.

The Beatles are similarly mythic, and are constantly being repurposed to fit the needs and desires of their fans. Today, we know that the important thing about Judy Garland isn’t who she was in 1939; to freeze her in her moment of largest mainstream appeal, the Mickey Rooney period, would be preposterous — you would miss everything that was extraordinary about her, and most of what has lasted. But go to Beatlefest, or read Rolling Stone, or listen to Beatlefan’s podcast, and you get a single vision of the Beatles, over and over. Ed Sullivan; the Mania; Lennon Remembers; John Vs. Paul; The Ballad of John and Yoko; chart-toppers and reminiscing. What seems to be important about the Beatles is their commercial success,  and the indelible impact they had on white guys, and a few women, living in the Tri-State area in the early Sixties. I swear, half the time I expect them to start talking about Carvel ice cream.

I’m not saying these perspectives don’t have some truth to them, they do. Nor am I saying that they aren’t evocative to some people — they remain powerful. My parents, for example, seemed genuinely pained when I told them fifteen years ago that John and Yoko’s marriage didn’t seem to be all that great. But the myths beloved by Boomer Beatlefans aren’t the truth, and they aren’t even the most interesting perspectives anymore. It’s time for other groups, with other perspectives on John, Paul, George and Ringo, to have their say.

When I was a kid, one of my introductions to the Beatles was a lovely book called “The Beatles Forever” where, with lots of pictures, Nicholas Schaffner detailed the history of the group, interspersing it with his own experiences as a Beatles fan growing up in New Jersey. In those pre-Goldman, pre-Anthology days, it was a great book. It’s still great, if you’re nine.

But unlike, say, paper miniskirts and the VW microbus, the Beatles are not an artifact of the Sixties; nobody, not even Millennials, likes the Beatles ironically. Nor are John, Paul, George and Ringo the property of the Baby Boom generation — with every year, and every remix, it’s clear that they’re much, much bigger than that. Yet they are endlessly claimed by the Boomers, and while this is usually called nostalgia, I think it’s more an attempt at reflected glory. “We are the generation that recognized them as geniuses; we supported them; we followed them.” And this is true, as far as it goes — but many of the issues that we discuss on this site are the result of some Boomer trying to shrink the Beatles to fit compactly into his (almost inevitably his) own life story. Shout! is what it is, in my opinion, because it was a fundamentally cynical attempt to give Boomers the story they wanted, in exchange for cash. And The Lives of John Lennon is the same thing, only in reverse.

Being born in 1969, I’m used to listening in on the Boomers talking to themselves and calling it truth. But it’s time to admit that, if the Beatles are worth thinking about, they’re worth really thinking about. This is, perhaps, why I found Beatlefest so unsatisfying. Unlike the LOVE show at the Mirage, Beatlefest seemed to rely on an earlier shared experience. Every talk I went to, the author asked for a show of hands: “How many of you saw the Beatles on the Ed Sullivan Show?” And there was an authority conferred via that. It’s the same authority that makes certain fans react with scorn when it’s suggested that John made a pass at Paul. As if they knew John and Paul intimately, simply because they bought all the LPs the day they came out.

The Baby Boomers have a lot to say on the Beatles, and much of it is valuable. They will, via numbers and proximity, always provide the main thrust of the narrative. But like @ChelseaQW, I want to hear more and different perspectives. What did the Beatles mean to the queer community in the 60s and beyond? To women? Or African Americans? (The conventional answer is, “Little to nothing,” but I simply don’t believe that. The Beatles are simply too big a cultural phenomenon for any group to evade.) What do the Beatles mean to a person under 25? Who didn’t even watch Anthology when it first came out?

Finally, through the scrim of Boomer wish-fulfillment, it’s important to remember that the Beatles themselves were not Baby Boomers; they were, like most of the people who made the Sixties go, products of an earlier generation. Check out Joshua Glenn’s Hilobrow for an in-depth discussion of this group. The Boomers knew a great thing when they heard it, and for that we should all be grateful — but the Beatles were the product of a totally different time and place. Their story is not the Boomers’ story. They are much more complicated, and that’s a good thing.

What do you all think?