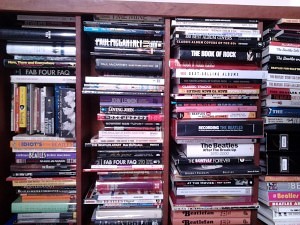 I‘m thinking about which Beatles books are essential because I moved last week and was confronted by the sheer volume of tomes I possess about the band (not to mention the ridiculous number of books about other subjects . . . .) So here’s my list of the ten Beatles reference books I pull off the shelf most often—the ones I’d put in the box if I could take only one box of Beatles books with me on my next move. Hey Dullblog readers, I’d love to see your lists as well.

[Note: These are listed in no particular order, since it became clear I could spend a whole day moving books up and down the list. So all these just get the “essential reference” tag.]

The Beatles, Anthology. For getting the story (various slants and all) from the folks the rest of the books are about.

Mark Lewisohn, The Complete Beatles Recording Sessions. Nothing like learning how things played out at Abbey Road day by day.

Bruce Spizer. Beatles for Sale on Parlophone Records and The Beatles on Apple Records. All Spizer’s descriptive, lavishly illustrated discographies are definitive and fun to read.

Ian MacDonald, Revolution in the Head. A song-by-song look at the complete works, with some of the best musical analysis of the band ever written. Even when I disagree with MacDonald, I learn from him.

Tim Riley, Tell Me Why. It’s instructive to read Riley’s song-by-song criticism next to MacDonald’s. Both books are excellent.

William J. Dowlding, Beatlesongs. Concise look at facts related to the songs: when recorded, chart action (if any), authorship, etc. Quoted comments about the songs from the band, George Martin, and others are a great addition.

Steve Turner, A Hard Day’s Write. This look at the songs is less exhaustive than MacDonald’s or Riley’s and more impressionistic than Dowlding’s. Turner writes well, and the photos make this a visual guide to the band’s look at the time each song was written.

Barry Miles, The Beatles Diary. Slightly (but only slightly) edges Lewisohn’s The Complete Beatles Chronicle for me. The illustrations and quotations make this day-by-day account lively.

Mojo/DK, The Beatles: Ten Years That Shook the World. The dark horse on this list—I find not so many people are familiar with it—this is an extremely well-done compendium of pieces about various aspects of the band and its history, done on a year-by-year basis. Well worth seeking out.