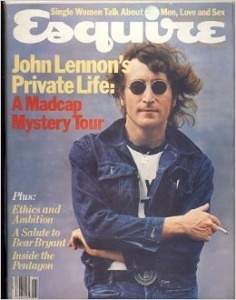 Inside: Laurence Shames’ “John Lennon, Where Are You?”

I am in the process of throwing out the contents of several filing cabinets, almost a decade’s worth of paper. It’s quite a daunting task. This morning I unearthed something cowering among the dust and silverfish that I thought might be of interest: “John Lennon, Where Are You?” by Laurence Shames. Published in the November 1980 issue of Esquire, Shames’ unsuccessful attempt to meet and interview the ex-Beatle is a fascinating portrait of Lennon taken from an oblique angle.

It’s nowhere online, so I’ve uploaded the PDF below, to make the information accessible to fans, scholars, and any other interested parties. It was definitely helpful during the writing of my comic noir novel, “Life After Death for Beginners,” which some of you have read and enjoyed. Of late we’ve talked about this site carrying the banner for smart, historically aware Beatle fandom, so I thought this might be something Dullblog could begin to do, saving items from the memory hole.

In addition to Shames’ article I’ve included the letters section of a subsequent issue; I found the reactions interesting. It was run in January 1981 — but created in November 1980 if not earlier, well before Lennon’s death. The media was full of stuff like that, items out of sync with the new reality; and for a bit of time one saw content created before December 8th that was fairly caustic, suddenly seeming vastly inappropriate.

John Lennon, Where Are You? by Laurence Shames, originally published in Esquire, November 1980.

If this proves popular, I’ll add more extracts and articles to the site. On the back of the scanned pages I’ve written in blue ink, “I preferred a puzzle to a self. — John Lennon, December 1970, Esquire.” This is from an earlier article which I will scan and post if people like this one. It’s got a frankly racist title, but it’s a revealing glimpse of John and Yoko in the days of Primal Scream.