All You Need Is Love: Martin’s Greatest Accomplishment? 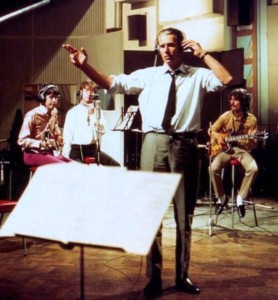 David Yearsley over at Counterpunch has a wonderful appreciation of George Martin’s work on the Summer of Love anthem “All You Need Is Love.” Unfortunately Apple has taken down the linked video — maybe they think your momentary frustration will spur a quick purchase of “1+”? Instead of making you think, “Jerks.”

It was only fitting that the fifth Beatle so often out of frame should be the first member of the band to be introduced, if namelessly, to the live world audience. Martin comes off in this quick shot not only as debonair but also as sheepish, like a school boy caught in the act of mischief making. If you watch carefully you can see that his right hand tries surreptitiously to hide something in the pocket of his white suit jacket. To calm his nerves Martin had poured himself a glass of Scotch when the globe’s collective eye turned prematurely to him.

That’s so George Martin; not just that he poured himself a stiff belt, but that his reflexive sense of decorum led him to cover it up. Might be kids watching — it was only 9pm, and this was the Beatles. (Not just “Cold Turkey” was out-of-bounds, but “Wild Turkey,” too.)

Especially to American eyes, George Martin always seemed patrician in the best sense, probably because he wasn’t really a patrician at all. That’s what was behind Lennon’s shameful treatment of Martin after May 1968, not any dissatisfaction with his work (Martin’s job on “Strawberry Fields Forever” should’ve won Lennon’s loyalty for life), but a childish rich man’s rejection of anything that struck him as middle-class propriety. But of the two? It was George Martin who was the real working-class hero — to quote the Vulture tribute: “Despite his outward urbanity he’d come from a poor family, growing up without electricity, or even a kitchen, in a tiny apartment in North London.”

So let’s lift a glass of scotch to a man with great ears — and heart, too.

Why I love our commenters so much…