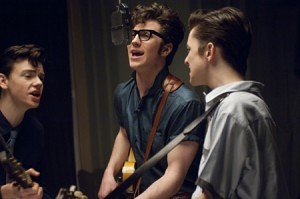 ED PARK • Just saw this on Salon—a very good review of the Scorsese documentary on George and of “Nowhere Boy.”

I love that the author, Erik Nelson, describes himself as “a card-carrying Beatlemaniac, with a mail-order degree in advanced Moptopology.”

This is my favorite paragraph:

“A much scruffier and ultimately more revealing insight into the Beatles Creation Myth comes from the 2009 “Nowhere Boy.” This movie is set entirely in those moments when a strange kind of human alchemy transpired, in the grimy laboratory of Liverpool. No attempt is made to explain how the magic happened, but the viewer gets the distinct sense “why.” It’s ironic that one of the most insightful glimpses into the real George Harrison in “Living in the Material World” comes from a long excerpt from “A Hard Day’s Night,” where George stumbles into an advertising focus group, and returns the cynical condescension he is given with a far more withering detachment. The fact that this scene is wholly fictional does not diminish its insight – and the same thing can be said for “‘Nowhere Boy.'”