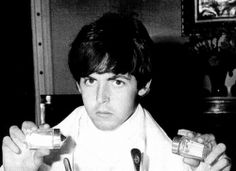 “You sold me oregano!”

Folks, just a quick check-in here — earlier a commenter put up a link to a downloadable .epub of Philip Norman’s new biography of Paul McCartney. This file is almost certainly an infringement on several entities’ copyright, and I removed it as soon as I was made aware of its existence.

As someone who has lost thousands (millions?) of dollars in royalties because of exactly this kind of piracy, I take a very dim view of this type of behavior. You want a book, go buy the book. Or get it from the library. Piracy hurts authors much more than it hurts corporations. In the UK, France and Germany, where there was little use of filesharing networks among tweens in 2003-5, I did very well; in the US, where filesharing culture was much stronger, I did poorly. Every takedown notice I wrote — and I had to write them myself — was for a scan of the US version of the book, not the (much more popular) UK edition. In my case, pirates reduced the paid commercial success of my books, which discouraged my US publishers from investing in publicity, reduced my subsequent advances, and moved me from a bestselling author to a midlist one. Which proved to be the difference between my continuing to make money as an author, and not.

Posting stuff like this is a great way to get me to take down this site. I cannot afford any kind of legal hassle, and will always try to stay on the side of respecting artists’ copyrights. Though the doctrine of “fair use” is a flexible one, and continues to evolve in the era of the internet, posting a cracked .epub is, in my opinion, not okay.