Chip Madinger’s and Scott Raile’s  Strange Days Indeed–A Scrapbook of Madness presents John Lennon and Yoko Ono aficionados with a dizzying spread of information – and it’s only the first volume in a projected three- to four-volume work that aspires to chronicle all the doings of JohnandYoko. Madinger (coauthor of Eight Arms to Hold You, 2000) and Scott Raile (academic advisor at the University of Colorado, Boulder) draw from an enormous range of materials to create a day-by-day, sometimes hour-by-hour, chronicle of the couple’s activities, beginning in 1966. Even those familiar with the Lennon/Ono story will learn much from the deep dive Madinger and Raile take into the minutiae of recording sessions, art installations, and less-classifiable happenings. The relatively hefty price tag ($100 for the softcover and $150 for the hardcover) seems to be justified by the sheer amount of material presented, although I was only able to look at the online preview (see the link above) and not the published book. [The book  is available through the authors’ website, www.lennonology.com] 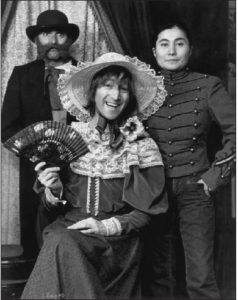 The highlights of Strange Days Indeed include:

It helps greatly that Madinger and Raile create a sardonic narrative voice that is both fun to read as it addresses repetitive elements and offers witty or incisive commentary on the events being reported. The many, many graphics included in the book add immeasurably to its value. Just when you’re reading and wishing you could see something (such as the bags with the acorns, starring in what I came to call “The Saga of the Acorns”), there it is! 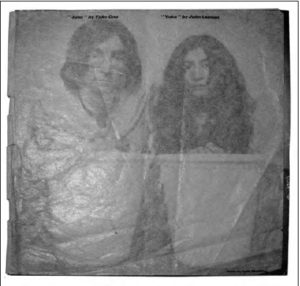 As the authors note, John and Yoko look as if they are sprouting from the plastic of the acorn bags.

The images give a vivid sense of the time and place in which these events occurred. And by coordinating information from multiple materials–including books, newspapers, interviews, and many other primary sources–Madinger and Raile manage to create a single timeline of complex events. If you don’t want to read umpteen bios of Paul, George, and company to glean extra tidbits, you don’t have to. The authors have meticulously pieced the salient bits together and arranged them in a clear chronology.

As a result of that chronology, it’s newly possible to follow the ins and outs of various stories as if in real time. We learn the complex narratives of the acorns (which keep showing up), the much-moved bench at Coventry Cathedral, the making of Two Virgins, and the miscarriage documented in Life with the Lions, among others.

Depending on what you’re looking for from the book, you may be relieved or disappointed to discover that the focus throughout is on journalistic reporting rather than analysis of events. Besides details about musical, art, and political activities, you’ll learn specifics of legal issues, business dealings, studio bookings held and cancelled, and costs, costs, costs. It’s intriguing to see that the Beatles, Lennon, and Ono had to deal with the same kind of mundane issues the rest of us do.

I did have questions about some of the choices Madinger and Haile made about what to report and how to present events.

Admit it, Yoko looks great in this promotional image for her “Half a Wind” show.

Overall, Strange Days Indeed offers fans like me, who didn’t experience the Beatles era firsthand, the opportunity to feel something of what it must have been like to be alive when the Beatles were in the news on a daily basis. The newspaper reports allow us to read about John and Yoko’s art, music, film, writing, and extracurricular adventures as if they are unfolding a real time–including them was a smart choice on Madinger and Raile’s parts.

If you have a penchant for completism and an unquenchable Lennon/Ono obsession, this series of volumes promises to fulfill all your desires.

Mary Klein is a writer, editor, and longstanding Beatles fan (in high school she painstakingly painted one wall of her room with the cover of “Yellow Submarine,” working grid by grid). In addition to her work in publishing, she plays bass and keyboards.