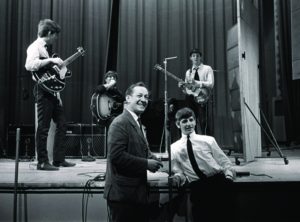 A member of the group’s original Liverpool gang, Barrow was part of the Beatles’ story from 1961-1968. Record reviewer for the Liverpool Echo from the age of 17, Barrow was working for Decca when Brian Epstein called for some advice regarding a pop group he’d just agreed to manage. Using his connections, Barrow was able to finagle the Beatles an audition. Not forgetting the favor, Brian Epstein later hired him away from Decca to handle press for all the NEMS groups.

As every obit is obligated to mention, Barrow coined “the Fab Four,” which must have been a great relief for a man who typed “The Beatles” almost as much as I have. More importantly around these parts, he came up with the idea for the Beatles Christmas records, which are a Gerber household tradition. You start opening presents in the excitement of 1963; when you get to 1969 and they’re all phoning it in, it’s time to take the wrapping paper down to recycling and have brunch.

Barrow and the group went their separate ways after Epstein’s death and the emergence of Apple; I suspect Apple’s heavy hippy scene was not for him. He went on to have a successful career in the buoyant and lucrative rock business the Beatles helped to create. Interestingly Barrow left it in 1980, in part because he didn’t like punk rock.