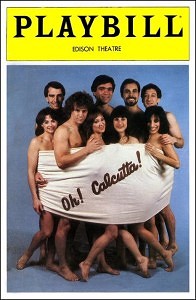 This musical was brought to you by Purell.

First mounted (so to speak) in 1969, “Oh! Calcutta!” was a massive success — long runs on both sides of the Atlantic, an even longer run as a revival — but you don’t hear about it a lot today. Tragically, a lot of the hijinks of the late 60s and early 70s went down the Memory Hole as soon as Reagan was elected, for reasons too lengthy to get into here. So much to say that a Broadway musical featuring full frontal nudity from both sexes was very much an idea of its time, and very much not of any time since. Which is why I’ve always thought it was a grand idea — because I am also a product of 1969.

(Looking over a précis, the jokes aren’t very funny. You know, I oughta get some comedy folks together, and do a better version of this. I promise none of us would appear naked.)

Here’s the sketch, which I’ve copied from this post.

FOUR IN HAND by John Lennon

(Four chairs, backs to the audience. Facing them, a large projection screen divided into four sections, one for each chair. Three men impatiently waiting. A doorbell rings.)

(George enters: he wears a fedora.)

1: If you’re going to join the group, George, you have to remember we always start on time.

3: Look–We gonna talk, or we gonna jerk off?

1: Ok, let’s get started. This is your seat, George. Now this (pointing to screen) is a new kind of machine–a telepathic thought transmitter. Whatever you think about flashes on the screen. Now the rules of the game are this: all of us think of things to jerk off to–until somebody comes–and the first guy who comes has to stop everybody else from coming. Got it?

1: All right. Let’s give it a try. Whatever comes to mind, George.

2 (rises, adjusting his pants): I told you not to invite outsiders.

2: We haven’t had a vacancy in six months, George! Harvey only left because he got a divorce.

3: How’d you like a silver bullet up your ass?

1 (walking to George): You sure you’re all right, George?

(They all sit down again.)

1: And cut the horseshit, George.

(The music starts again and the images start to flash. They are slightly more nude than before–close shots of breasts and bottoms. By trial and error, the four screens begin to form a composite picture. George is dutifully collaborating. Finally, at the height of the rhythm, screen facing 1 shows a nude model’s head, screen facing 2 shows her breasts, screen facing 3, her legs. Pause. The recumbent image of the model is almost complete. Suddenly the strains of the William Tell Overture are heard again with another image of the Lone Ranger on George’s screen.)

(He rises. His screen continues to flash the Lone Ranger. With one jabbing sweep of his arm, he flashes Lone Ranger pictures on the other screens as the music builds. As each image flashes, 1, 2 and 3 lose their concentration completely and give up the contest.)

George (turns as he goes to exit): See you next week, fellas.

(Sound of four “whistling” gunshots as each remaining screen blacks out.)
###

I actually think Lennon’s conceit is much less funny than the reality that it was based upon, which is a natural “blackout”-type sketch.

According to Paul McCartney, “We used to have wanking sessions when we were young at Nigel Whalley’s house in Woolton. We’d stay overnight and we’d all sit in armchairs and we’d put all the lights out and being teenage pubescent boys, we’d all wank. What we used to do, someone would say, ‘Brigitte Bardot.’ ‘Oooh!’ That would keep everyone on par, then somebody, probably John, would say, ‘Winston Churchill.’ ‘Oh, no!’ and it would completely ruin everyone’s concentration.”

Good clean fun. But on the whole, folks, I prefer Beatlemania.

I want to hold your hand…