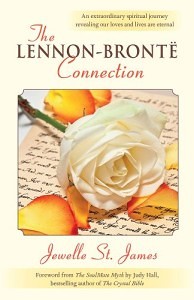 NANCY CARR * A recently self-published book by Jewelle St. James, John Lennon and the Bronte Connection, claims that John Lennon was the reincarnation of Branwell Bronte, the brother of the more famous Charlotte, Emily, and Anne. Also that the author is, perhaps, the reincarnation of Emily Bronte. And that in an incarnation previous to this 19th century one, Jewelle and John were lovers (as “John Baron” and “Katherine St. James” in 15th century England). The new book is an elaboration of her 2011 work, The Lennon-Bronte Connection.

“So what?,” you may well ask. There’s no shortage of wacky book-length manuscripts available for purchase in this era of Everyone His Or Her Own Publisher. The elements of wish-fulfillment in this narrative are readily apparent, even in bare outline. Why should we care?

As Devin said in his “John Lennon, Hollywood Scumbag?” post, I think we need to acknowledge and analyze some of the Beatles-related items that are being widely circulated (I saw this on the “Beatles News” site), even when those items are of questionable value. Like the Daily Beast piece that Devin discussed, I believe that the notice of St. James’ book on examiner.com points to larger, disturbing tendencies in the way we deal with history and celebrity.

In this case, I’m not concerned about St. James’ reincarnation claims. Since this kind of assertion is essentially unprovable, readers are free to believe or disbelieve based on their own knowledge and experience. I will observe only that it is striking, given the disparity in numbers between the upper and lower classes across history, that few people who explore past lives seem to discover that they were undistinguished farm workers or washerwomen.

But then there’s this, quoted from Shelley Germaux’s review of the book:

“A strong theme throughout the book is her heroic defense of Branwell, who has been so maligned since his death. She quotes from several biographical sources that support her feelings. The quotes also provide support for her feeling that Emily Bronte did not write Wuthering Heights on her own, but that it was Branwell behind the pen throughout much of the book.”

Now, once you start arguing for reassigning authorship of works by writers who are dead and can’t defend themselves, you’d better have some hard evidence. What I object to here, as in my post on Jude Sutherland Kessler’s Lennon books, is blurring the line between what can be historically established and what the author thinks or “feels” happened. At least St. James, unlike Kessler, appears to acknowledge her assertion is opinion and not fact.

But there’s plenty of evidence that Emily Bronte did indeed write Wuthering Heights. The idea that Branwell wrote or contributed to the writing of  this novel has been around for a long time — since 20 years or so after the publication of the book in 1846. It’s also been repeatedly dismissed by literary scholars and historians who have examined the record. As Irene Cooper Willis put it in a 1947 journal article, “The claim that Branwell Bronte wrote or had a hand in writing Wuthering Heights rests on evidence that has only to be examined critically to be suspected.” I am reminded of the “Paul is Dead” myth, a sturdy weed surviving well into the 21st century despite a dearth of substantive evidence.

This book’s appearance is a small occasion, but it connects to essential questions about fact and history.

It is important to stop and recall that the ideals of objective journalism, and of history based on a thoroughgoing canvass of available sources, are of relatively recent date. They are fragile. Unless readers champion, perhaps even demand, such ideals, they are likely to perish. I believe we have a responsibility to avoid, as best we can, overreading or misreading the historical record or supporting such practices.