NANCY CARR * Quick—what’s the most untypical song the Beatles released, and the one I’d bet 99% of Beatles fans listen to least? Well, that’s the one that Tim Riley, the author of Tell Me Why and a well-reviewed Lennon biography, calls the fifth best Beatles song in an article in this recently released magazine special. All together now: “Number 9, Number 9, Number 9 . . .”

Of course any list of “The Top Five Beatles Songs” is, at this point in the 21st century, going to have to include a startling pick if it’s going to get any attention at all (and see, it worked!) But I can’t help but feel that a couple of Riley’s choices reveal a decadent point of view, which overvalues the outré and obscure and overlooks the characteristic and classic. See what you think:

I’m actually a very good critic most of the time.

The top three of those picks are eminently defensible, in my opinion. The last two I think are crazy. Usually I’d employ Devin’s strategy of muttering “whatever” and passing by, but I think it’s worth pausing over this list to think about what it suggests about the current tendencies of Beatles criticism.

I consider Riley an astute critic—Tell Me Why is a valuable guide through the Beatles’ music, and I’ve learned plenty from him even when I disagree with his assessments. And the “top 5” article begins with a paragraph in which Riley and his co-author Patrick Foster acknowledge the farcical nature of all such lists.

“Let us proclaim first off what an arbitrary and pleasantly unpredictable process” picking the top five Beatles songs is, the article begins. It continues, “ask us next year—or even next month—and this list might wind up composed of entirely different songs, such is the grandeur of this catalog.”

Fair enough. But keep in mind that the Beatles recorded 186 original songs (per Ian MacDonald’s Revolution in the Head), so choosing the top 5 means singling out the best 2.7%. And however much rhetoric Riley deploys in his descriptions of  “Revolution No. 9” and “That Means A Lot,” neither song belongs in that select group. 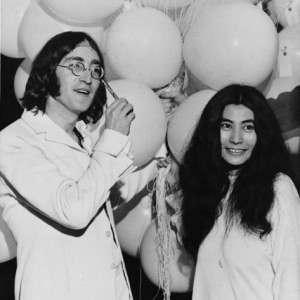 The lucky winner will get the balloon containing the REAL explanation of what “Revolution No. 9” means!

Riley picks “Revolution No. 9” for “its disorienting contours as music concrete (found sound alongside melody and harmony) and alien status as a Lennon-McCartney non-sing along.” Which translates roughly to “I like this because it’s so different from every other Beatles song.” And it’s different for good reason: it’s basically a Lennon-Ono experimental piece grafted onto a Beatles album. Riley argues that the song’s “perversity” serves a crucial function on The White Album, giving “everything else poise–as if “Cry Baby Cry” had gently hypnotized side four of The White Album off into dreamland.” And he ends his encomium this way:

“Inside this experimental track’s meandering compartments, the radio wonderland of Lennon’s deep psyche peeks through. Feint cries of Beatlemania echo in its chambers. With hindsight, you have to wonder why Lennon had to fight for its inclusion while McCartney didn’t have to mount any argument for ‘Honey Pie.'”

Riley’s phraseology here is worth unpacking. It reveals just how much “Revolution No. 9” presents itself as a problem for the hearer to work out. A critic may comment upon a song like “Please Please Me” (as Foster does in the article, since it’s one of his picks), but it does not demand the same type of explication. “Revolution No. 9” is a rarified pleasure, one that solicits the critic’s expertise and allows him to display it in full. That talking in basic terms about the song requires a descriptor that must be defined for the general reader (music concrete) says much.

Not merely liking “Revolution No. 9,” but liking it better than over 97% of the Beatles’ catalog, proves one a rara avis indeed. It’s a badge of elite taste in much the way that professing an enjoyment of Alain Robbe-Grillet’s “new novels” was once a marker of literary sophistication among English grad students. That’s part of what irritates me about this choice. It smacks of  “look at me, I chose the song that no one would predict” and of a kind of contempt bred by familarity with the more typical songs in the Beatles’ catalog. 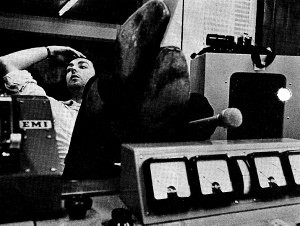 But have I put in ENOUGH girl cooties?

It’s no surprise that the opposite end of Riley’s White Album spectrum is “Honey Pie.” It’s not a great song, for sure. But it, “Ob-la-di, Ob-la-da,” and “I Will” serve a function on the White Album at least as crucial as the one Riley claims is served by “Revolution No. 9.” These three McCartney-authored songs, which employ music-hall conventions and concern romantic love and domestic life, are windows thrown open in the often insular funhouse of the White Album. They offer views back to the Beatles’ musical roots and out to the audience, composed mainly of non-famous people trying to make their way in the prosaic world. Which is to say: girl cooties. In gender and class terms, “Revolution No. 9” is male and elite, “Honey Pie” is female and lower-middle-class. 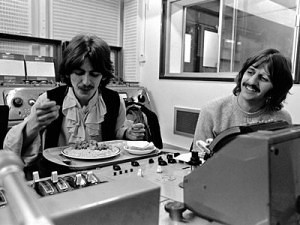 George, it’s either laugh or cry at those crazy critics who keep ignoring us.

Another aggravating feature of  Riley’s and Foster’s article (hey, if I’m going to rant, I may as well go full tilt) is the degree to which it is The John Lennon Show. Every song in both top fives except “That Means A Lot” was written by Lennon. (Though Riley attributes it to McCartney, the song’s authorship is a matter of doubt, with MacDonald listing it as co-written by Lennon and McCartney.)   In their commentaries on the top five each has chosen, Harrison and Starr are mentioned by name once, when Foster explains why he chose “Rain” as his number 1. McCartney is praised by Foster for his bassline on “Rain,” and by both critics for his vocals on a couple of songs. But Riley takes care to go on record against McCartney’s sentimentality:

“His melodies can soar even when cloyingly sung (‘Eleanor Rigby,’ ‘Here, There, and Everywhere’) and his coyness annoys even when framed by tart arrangments (‘For No One,’ ‘When I’m Sixty Four,’ ‘Martha My Dear.’)”

In writing this I’ve realized that part of my exasperation stems from weariness with books and articles that consist of watching two or three guys munch their way through somebody’s musical career. I’m tired of “debates” that aren’t debates. (Riley and Foster’s article is billed as one, but they mostly congratulate each other on their choices.) And I’m tired of so much music writing feeling like Guys Writing About Guys For Guys. When it comes to writing about the Beatles, I’m tired of seeing Harrison and Starr virtually ignored. I’m tired of hearing critics repeat the same old things about McCartney without really examining their foundation. And, much as I love John Lennon as a songwriter and rhythm guitarist, and consider him my favorite rock singer of all time, I’m tired of critics who’ve drunk too much of the Lennonade.