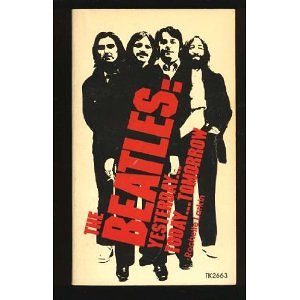 In 1974, it seemed entirely possible that the Beatles would reunite. I knew this already, as we all know historical facts, but listening to a voice from that time—a voice that of course can’t know what’s to come—gives that reality a new vividness.
I came across this book [The Beatles: Yesterday . . . Today . . . Tomorrow] in a used bookstore, and bought it for a dollar. I’ve never heard of the author (Rochelle Larkin), and it was published by Scholastic Book Services. It was one of those books you could order from a newsprint flyer your elementary or junior high school teacher handed out. Then one day the big box would come, and you’d take your chosen volumes home.
Larkin’s book is far better than you’d expect, given its provenance. The last few pages, in which she wonders what’s to come, are the best. Her description of how the former bandmates have separated, geographically and metaphysically, is succinct and accurate. And her thoughts about what might happen next offer a window into what was imaginable in the mid-1970s.
Here’s Larkin on what might be, if the former Beatles could lead truly separate lives:

“If there were still four corners to the world, we might someday find a Beatle sitting in each of them. Paul could be hiding on his farm in Aberdeen, Scotland. George would be in India, studying and meditating. John could be in New York, writing letters to newspapers and playing guitar for the fun of it, in clubs that haven’t been able to afford him since 1963. Ringo could be a big movie star in Hollywood or visiting Elizabeth Taylor on her yacht.”

She realizes this isn’t possible, though.

“But the world has no corners—it isn’t square. It’s round. “Because the world is round it turns me on,” they wrote. What it turns the Beatles on to still is music. They will be writing it and performing it wherever they may be. The big question remains: will they ever be doing it together, all four, the way it used to be?”

Larkin notes that the Beatles’ chief songwriters are making music that doesn’t measure up to the Beatles, John with Elephant’s Memory and Paul with Wings. Then she issues the call so many made for so long, a call that I find both touching and maddening in its naïveté.
“‘I didn’t leave the Beatles; the Beatles left the Beatles,’ Paul has said in his own defense. Whether or not that’s true, it does point up the fact that the only thing that separates the Beatles is themselves. If they really wanted to get together again, they could. In fact, getting together would probably be a lot simpler than separating is proving to be. Pitch out the lawyers and bring back the sound technicians, the re-mixers, the arrangers, and producers, the back-up musicians, and the vocalists. Write new songs and use new instruments and explore new ideas. Mix John’s politics and Paul’s romanticism and George’s philosophy and Ringo’s Ringoism . . . and throw a giant party for the whole world! Do it, Beatles!”
“Pitch out the lawyers”? Peter Doggett’s You Never Give Me Your Money is a master class in why that couldn’t happen. And mix all the disparate elements of the Beatles back together again, because the only thing separating the Beatles “is themselves”? That proved to be more than enough. Larkin’s recipe for fixing the band reminds me of Monty Python’s “How to Do It” lessons, in which the entire instruction for playing the flute consists of “you blow in this end, and move your fingers up and down over the holes.” Great, let’s get right on that.
The second saddest part of reading Larkin’s ruminations on the state of the former Beatles in 1974 is knowing that John Lennon’s about to disappear from the music scene for five years; he won’t be doing much playing in those clubs. And things will never be put right, not really.
The tragic thing isn’t that the Beatles didn’t reunite; it’s that they never fully made their peace. That the four people who gave the world such intense and lasting musical joy were scarred by the experience of having achieved that, and to some extent permanently alienated from each other—that’s the tragedy, looked at from 2012.