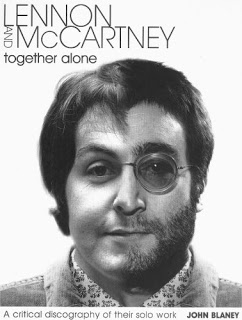 “Lennon and McCartney: Together Alone” (2007) is an in-depth look at the solo careers of both men that is comprehensive, well-written and illustrated, and refreshingly free of bias. It’s changed the way I think about some of Lennon’s and McCartney’s solo music. For example, I’ll never hear “Watching the Wheels” the same way again.
I can hardly stand to read anything biographical about either Lennon or McCartney anymore, since so many writers moved to compose book-length works on them are grinding an ax of some variety. Reading John Blaney’s book was, for me, like opening a window and letting welcome fresh air into an overheated room…

Blaney writes with interest about both Lennon and McCartney and spends more time on facts than speculation. The discussion of every album includes extensive notes on its recording, including personnel on each track and comments from many people involved in the work. Rather than emphasizing his own interpretations, Blaney mostly allows people directly involved with the music—especially Lennon and McCartney themselves—to speak about it.
When Blaney does speculate, he makes it clear he’s doing so and grounds the speculation in something tangible. Here, for example, is the part of his commentary that’s changed the way I hear “Watching the Wheels”:

“But Lennon had been contemplating more than the fast-turning wheels of showbiz. Religion and spirituality had influenced him. Where previously he’d tried to imagine a world without religion, he now found himself drawn to it. The Ba’hai Faith may have affected Lennon: its central belief, that humanity is one single race and that the day has come for its unification into one global society, was condensed into a pithy aphorism, “One World, One People,” and inscribed into the dead wax of the “(Just Like) Starting Over” single. The wheels Lennon found himself contemplating were, more often than not, those governing destiny: the karmic wheels that influence the spiritual evolution of humanity as a whole.” (p. 146)

Now, I don’t know whether Blaney is right about Lennon’s possibly being influenced by the Ba’hai faith, but there’s certainly a chime between that faith’s key beliefs and Lennon’s hope for a world not riven by religious or national differences. Thinking about that makes it a bit easier for me to understand how the author of the anti-religious “Imagine” was also fascinated by numerology, horoscopes, and other forms of mysticism.
And I’d never have known about the writing in the deadwax, since I don’t have that 45.
So thanks, John Blaney, for producing a Lennon/McCartney book that manages to be both even-handed and illuminating.