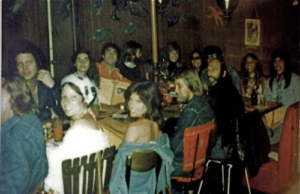 [Stalwart @Hologram Sam posted some of this as a comment, but it’s just too good not to surface on the main page. Albert Brooks is a comedian’s comedian—someone I want to get for Bystander—and his seminal comedy LP “Comedy Minus One” came out in 1973. This is from a 2012 Vanity Fair interview by Judd Apatow.—M.G.]

J.A. You said you were friends with Harry Nilsson?

A.B. I was. He was one of these comedy-freak guys. He would come and see my shows and he was very sweet and a massive drinker. I didn’t drink and I wound up being the driver. And then he introduced me to John Lennon, because they were best friends. I spent a lot of time with Harry Nilsson and John Lennon during those May Pang years, when he was out here. Those guys would get rowdy, but John Lennon was certainly a fun person. And John Lennon, again, was a frustrated comedian. All these guys, comedy to them was the holy grail.

A.B. Harry wasn’t even single. He was married. She was very forgiving with him leaving and coming back the next month. Look, sometimes it was too much. He was friends with Keith Moon. The Who were staying in Century City, and Harry said, “Come over. Keith is here—we’re having a thing.” Now, listen to this. I had just done a Mike Douglas in the afternoon and flew back from Philadelphia. And I come walking down the hall, and the housekeeper says, “Oh, you were on Mike Douglas—you were wonderful.” “Thank you so much.” I go in the room, and in about 20 minutes Keith Moon threw the television out the window. It was 16 stories up. And now the room is destroyed, and I’m going: I was recognized—I got to get out of here! How can I get out of the Century Plaza without being seen? Because I know in court she’s going to go, “The guy on The Mike Douglas Show!” You know? And I’m sitting there with Keith trying to be a Jewish mother: “Don’t throw the TV. If you want to get your frustration out, go run around the block, because the TVs, they don’t want them thrown out the window.”

J.A. What’s it like leading up to the TV going out the window.

A.B. A lot of craziness. Before a TV went out the window, a coffee table was turned over. Nobody went right to the TV. It was sort of like what’s left.

A.B. No, it’s done because that was the measure of their power.

A.B. I was on the road with these groups for a long time, and there were so many like that. I opened for Richie Havens, and someone in his band was fucking around in my hotel room and rubbed scrambled eggs on that cottage-cheese ceiling, where it sticks into the little holes. They all went to bed, and I’m up for hours with a washcloth, trying to get the ceiling clean, because I’m worried I’m going to jail. I wasn’t getting paid a lot. I wasn’t going to pay for the ceiling.

J.A. So how old are you when you’re hanging out with John Lennon? Are you, like, 23?

J.A. And did you grow up so much around show business that it didn’t blow your mind?

A.B. It’s a great question, because nothing blew my mind in show business, and he was the only person—the first time I met him, Harry said, “Get in that car there,” and I got in the backseat, and there was John Lennon, and the one thing I prided myself on in my comedy, you know, I’m not a person that was ever on. I was funny. I knew when to stop. I wasn’t that manic on, and I was on with him, and I didn’t know how to get out of it. I didn’t know what to do. And he said—that still remains the greatest thing to me—he leaned over and said, “I’ve known you for a thousand years.” And I just never felt bad again. That was a cool thing to say.

A.B. He was going through a lot. He was separated from Yoko, but I remember my album, Comedy Minus One, had just come out and was in Tower Records. So he and Harry and I went in. He bought them all. He bought three boxes of them. Then he drove down Sunset and hurled them out like Frisbees. And again I’m going, “Don’t do that. You’ll get a littering fine.” Boom. He’s just throwing them out on the street. So it’s good and bad. I mean, it helped my Billboard number, but now they are all over Sunset.

J.A. Was that inspiring creatively?

A.B. It was interesting to know what they think of comedy. They love comedy so much. It’s a language they don’t speak as eloquently. As much as you listen to the Beatles and say, “How do you write that song?,” they’re going, “How did you say that? Where did that come from?” And John was always the funniest Beatle. He had a sense of humor and he respected it so much.

J.A. They thought you were the cool guy.

A.B. Yeah! He thought I was the cool guy.