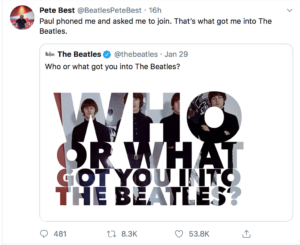 Those of you on the rightly maligned hellsite Twitter can, and really must, follow us. We’re at @HeyDullblog. (And I’m personally at @mgerber937.)  I say this for two reasons:

The first is, lots of Beatle and Beatle-adjacent news breaks on Twitter, and so we’ll be able to comment on John’s love letters to Paul the VERY MOMENT they are released.

“Dear Paul: What I propose is to COMMUNICATE SECRETLY through all our songs for the rest of our lives. Just in case all the meaningful glances and times we (seemingly inadvertently) (hah! as if) touched each other’s arm are not sufficient enough to clue the world in to the fact that we are rogering each other senseless on the regular. (BTW, keep your eyes open for the signet ring I lost in your underwear. Cyn noticed.) Now you might say, ‘Why not just come out? Why wouldn’t I, John Lennon, utterly unable to keep myself from babbling on about my latest enthusiasm, and ever-aware of publicity just, y’know, say it? Well…”

The second is, oh I had so much fun writing that paragraph I’ve forgotten what it is. Oh, I remember: I’m spending a lot of time on Twitter these days (@mgerber937 in case you’re interested) and, as you can see, it’s doing wonders for my powers of concentration and general mental health.

Pictures of Beatles and Pot?