Frequent commenter @meaigs recently expressed some thoughts about sexual politics and public perception of Paul McCartney, which I asked her to expand into a post. I hope you find her insights as interesting as I did; for me, some things snapped into place that had never made much sense.—MG 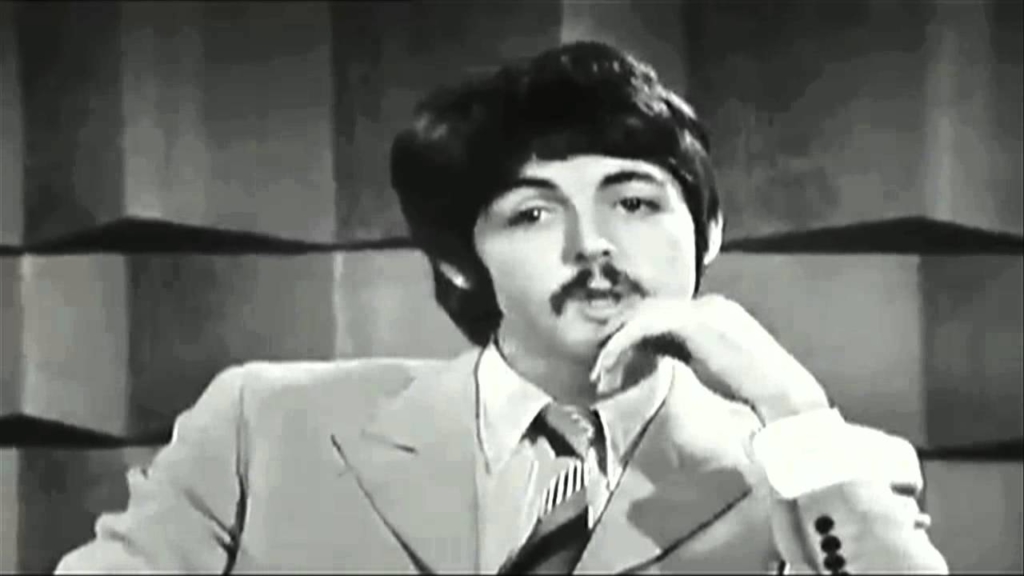 Paul McCartney is a man who gets treated as though he were a woman, and that is weird and bad. Not because being a woman is bad, but because women get treated badly.

Before watching Peter Jackson’s Get Back I was a casual Beatles fan. I didn’t have strong preconceived notions about the band members, their interactions, or their breakup. I hadn’t heard the claim that John was A Great Artist trying to escape the stifling environment of The Beatles, and that Paul was a showbiz-besotted control-freak who drove everyone crazy and wrecked the dream. The Beatles were simply a band I quite liked. I was about to start a wild ride.

From the moment Paul walks into his first scene he exudes masculinity. Not the fragile masculinity of puffed chests and barked orders. Something much more subtle and deep. It’s partly the luxurious beard, but it’s mostly the way he moves. “Swagger” is the wrong word, that would imply an attempt to display, to be seen. Maybe “saunter” is better. He comfortably strolls in, swings his coat aside, and grabs his guitar.

I was immediately struck by his easy physicality. That first time watching, as I saw him swing and climb, nonchalantly hopping over chairs and scaling walls, all I could think of was how male it was, but like, in a hot way.

I’m a bisexual woman, but I rarely find men attractive. I joke with my husband: “I’m straight for you and Paul McCartney.” All this to say that gender and sexuality were live issues for me as I began my descent into Pepperland. I was surprised to find myself attracted to Paul, and alert to his gender presentation. There was nothing in Get Back that hinted to me that Paul was womanly, or might suffer for being perceived that way. But then I expanded my reading.

The first word that caught my eye was “bossy”.

It’s impossible to read about the Beatles for any length of time without seeing that label applied to Paul. But it’s such a female-coded word, with connotations of power usurped (rather than legitimate). Once you notice that linguistic sleight-of-hand, you start seeing it everywhere: Paul is “pretty,” “cute,” “motherly.” He is “jilted,” “vacuous,” “a diva,” even “shrill.”

Why would this patriarchal language of female oppression be applied to Paul? If he were stereotypically effeminate this would be a familiar story; sadly no-one would be shocked to see him treated as inferior for his womanliness. The effect I want to highlight is not so obvious, but it is pervasive. (That said, you should try Googling “immovable heterosexuality”).

Let’s be honest: as much as I was originally struck by Paul’s masculinity, there is something ambiguously feminine about him. I can’t quite put my finger on it, maybe it’s the Disney Princess eyes, or the lips so often described as cherubic. It comes and goes, sometimes he couldn’t be more masculine, and sometimes facial hair makes him look like a woman in drag. His vocal range goes considerably higher (and considerably lower) than mine. My point is he doesn’t come across as an effeminate man, but he does sometimes trigger a “that is a woman” response in whatever part of the brain is desperate to categorize people in those terms.

No doubt Paul would put it down to being a Gemini.

Maybe what I’m getting at is that “effeminate” isn’t the same thing as “feminine.” Effeminate refers to a (much maligned) set of male behaviors that have been associated with femaleness, homosexuality, and by all-too-predictable-extension, weakness. But they’re not actually female behaviors and characteristics, they’re male.

Whatever signals Paul is giving off (be it facial structure or micro-expressions or something else), they are more like actual female signals than effeminate male signals. My contention is that the subtlety of this effect has meant that he’s been unconsciously categorized as a woman by many people who treat him with misogyny, but not necessarily homophobia.

I am by no means the first person to notice this. It’s a common theme on tumblr (where the demographic skews female, so familiarity with the mechanisms of misogyny is high).

One of the ways this manifests is how often Paul is considered an unreliable witness. In several ancient law codes the testimony of women was explicitly invalid (or multiple women’s testimony was required to be equivalent to one man’s). This was a codification of an existing prejudice, one that continues to this day. Women are not believed, especially when they are speaking alone (I won’t go into loads of examples, but Bill Cosby comes to mind). I haven’t seen anything to suggest Paul is particularly prone to lying. He’s conservative with what he reveals for sure, and his memory is about what you’d expect for an 80-year-old with a history of drug abuse, but he’s certainly no less reliable a witness than Ringo. John, who codes male, freely admitted to making things up, but it is Paul who consistently gets accused of “rewriting history.”

For example: many people discount Paul’s story of his inspiration for the song “Blackbird.” Some time in the early 2000s he started recounting that it was originally about the Civil Rights movement in the US. Rather than assuming that Paul had simply never publicly mentioned it before, many people accused him of making it up. That Paul has no need to bolster his credibility as a supporter of African-Americans should be obvious to anyone who’s at all familiar with Beatles history, but there has been a lot of sneering and eye-rolling about this claim. Well, there’s a recording from 1968 in which Paul tells Donovan:

“I played it for Diana Ross the other day. She took offense [laughing]. Not really [smiling] [Donovan laughs]. I did mean it like that originally! I’d just sort of read something in the paper about riots and that.”

This evidence might convince the eye-rollers that he’s telling the truth in this specific instance, but I can guarantee that it won’t change their minds about how believable he is in general. Their problem is not what he says, but who is saying it.

As for rewriting history:

“Revisionism is a part of historiography, and simply because a narrative has been revised does not mean that the new, revised version is incorrect.” – Erin Torkelson Weber,  The Beatles and the Historians

We know that John “I said that but I lied” Lennon was very successful in establishing a particular narrative about the breakup of the Beatles. Despite the cognitive dissonance required to believe everything John said, some people seem determined to try. Why shouldn’t Paul be given room to correct the record as he sees fit?

This phenomenon—Paul being interpreted as a woman—might be key to why Allen Klein so completely misread and “mishandled” Paul. I think he had bought into the idea that Paul was feminine and weak. He tried to bully Paul, calling him The Reluctant Virgin (which is not only female-coded, but sexually threatening), expecting him to be cowed. Which is not to say that no woman could have stood up to Klein the way that Paul did, rather that Klein was the kind of man who thought no woman would.

It’s also an undercurrent in the PR campaign against Paul that started in the early 1970s, and is still haunting him. I’m not old enough to have read hit pieces about “granny music,” and “insipid lyrics” when they were written, but they all soaked into the wider cultural understanding of Paul as an artist. Under that narrative John is lauded for his honesty in expressing anger and regret, but Paul is soft and weak for singing about domestic bliss and for empathizing with women, for suggesting that music is for grannies too (including grannies who like “Check My Machine”).

Can we take a moment to acknowledge how fucking sad that is? We as a society prefer Lennon-style toxic expressions of masculinity—lashing out in violence, giving full vent to anger – over Paul’s self-restraint, meeting personal responsibilities, caring for your family.

Patriarchy sucks. For all of us. Under patriarchy everyone is restricted from things they might freely choose, and subjected to things they don’t want. Misogyny is perpetrated by men and women, in ways that are sometimes subtle and often unconscious. Is it manly to have angst over having hurt loved ones and anger over them hurting you, but vacuous to enjoy fatherhood? Fuck that noise. When we laud John’s honesty for admitting he hit and hurt people, shouldn’t we admire Paul even more for not having done that? If we laud John for coming around to the joys of family and fatherhood in 1975-80, shouldn’t we praise Paul even more for having those values seemingly from the beginning?

In many (most?) accounts of the Beatles, John is the protagonist. We talk about The Day John Met Paul (not the day Paul met John, or the day John and Paul met). I think Paul is interpreted as John’s wife, in a metaphorical marriage. That makes it sound much less subtle than the actual effect I’m trying to describe, but I think it holds up. For example—and this still blows my mind—some people went so far as to say in public that it should have been Paul who died. Perhaps it makes narrative sense to them that the woman should be fridged to advance the man’s story, not the other way around.

I do wonder if Paul’s empathy with women, his remarkable ability to tell a story about a woman as though she were a fully realized human, stems from this direct experience of misogyny. Is he (consciously or not) able to put himself in women’s shoes because the world has insisted on putting him there for so long?

There is also something to be said about the subtle collective androgyny of the Beatles, which threatened adults right from the start of Beatlemania, but this is already long, and my thoughts on how that relates are underdeveloped.

Obviously Paul benefits from the privilege of not actually being a woman, so the misogyny aimed at him is less consistent and pervasive, but I do think it sheds an interesting light both on his mistreatment by the rock press, and on patriarchy as a phenomenon.

Paul is in many ways very masculine, but he is often treated like a woman in the language and narrative we use when we talk about him and the Beatles. By thinking carefully about how that negatively impacts him, we can learn something about what gender means to us, and what we do with that meaning. It gives us a new perspective on the pervasive misogyny in our society, and the many ways patriarchy drags us all down.