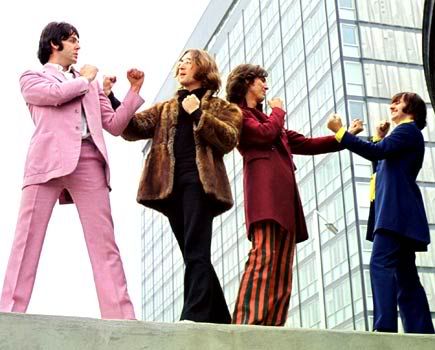 Last night, I had an epiphany—I was sitting here typing away at 12:30 am, crafting long, thoughtful, hopefully thought-provoking responses to a person I didn’t know and would never meet, about a topic I’ve probably written 100,000 words about. They didn’t seem to like me, and my considerable personal affability (ask anyone!) was beginning to wear thin. Why? Because I’d been here tens, hundreds of times before. I knew that nothing I’d write would ever convince them, and that if necessary they’d just switch the topic to some other thing — some other fact, some other era, some other band—to prove that I was wrong. I mean, maybe I AM wrong; but I’ve spent forty years delving into the nuances of the Beatles, and that should be respected…plus I’m one of the proprietors of this site, so people should be polite to me, at least. Not for the first time I thought, “I used to like Beatles fans. I should’ve just written a book, cashed the check, and gone onto the next project.”

Then I realized something…

This blog belongs to Nancy and me. I’ve been running it since 2008, she joined in 2010, and all told, we’ve spent about $25,000 to keep it running over the last 14 years. Hey Dullblog is not Twitter. Hey Dullblog is not for the commenters, nice or nasty. It’s a hobby of OURS, Nancy’s and mine, to give US pleasure. If other people want to chime in, fine, but they’re going to do so only when it interests us, and in ways we want. Dullblog is a way for us to explore Beatle-related topics we’re interested in, without apology or even a thought to anybody else’s obsessions or fascinations. If a commenter expresses an interesting viewpoint very well, we might go down that path a bit with them. Or not, but it’s always going to come back to what Nancy and I are interested in.

Fewer and fewer people are commenting, and those few are commenting more and more, about the same topics. We know this site is read by hundreds of people a day, and suspect that the toxicity of the comments are discouraging new, more interesting commenters. Our commenters seem to be engaging in less and less nuance, and threads—even when they stay on topic, which is rare—never reach any kind of synthesis, which used to happen a lot. I used to learn quite a bit from our commenters; now, not so much.

I can’t stress enough that these rules apply to commenters, not to Nancy, myself, or anyone we invite to post to the blog. We can talk about anything we like, in any way we like, for as long as we like. Because this is our site (you may sense a theme developing).

I don’t mean to come off as mean or aggressive, but you have no idea how wearying it is to moderate comments on this blog. It’s literally one of the worst parts of my day. It has been infuriating and saddening to see our once-high level of mutual investigation and respect decay and decay as the standards of friendliness and propriety on the internet have declined. I am beyond fed up with a few of you, yet have continued to engage out of Midwestern politeness, but enough is enough. Why on Earth you’d continue to lob in your opinions is beyond me—it’s clear we don’t see eye-to-eye. Just go start your own thing.

There is so much good writing and interesting Beatle-thought on this site. Nobody should really be commenting before they’ve read—at a minimum—our “best of” posts. You will enjoy them and read more deeply, or hate them and move on. Either is fine, but the commenting culture here WILL change, even if it’s just Nancy and I talking to each other.

“You, my pal, ROCK!”: Inspiration from the spam filter