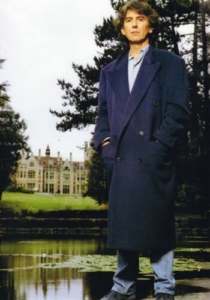 Reader David wrote me to ask:

“Some thoughts I’ve had recently with George Harrison‘s behavior within the Beatles particularly when the true Beatlemania kicked in. Do you think that kind of insanity going on around him, the crush of the crowds, the screaming, being chased and attacked…could all of that made him feel threatened, vulnerable, perhaps that his life was in danger? Ringo is on record talking about loving the experience. Paul certainly seemed to love it…John eventually I think stopped caring for it though he wasn’t a deer in headlights over it. George on the other hand, if you look at what he sought out in life, and how he lived his life in the post Beatle years…could his Beatle experience left him with legit PTSD that was just never diagnosed?”

David, I’m not in the mental health field, but do have some experience with PTSD—what causes it, how it feels, how you get rid of it. There are two questions here, both interesting to me.

I think the answer to #1 is definitely, yes. Think about how hearing a scream makes you feel: on high alert. Now multiply that by 50,000. Even if it all merged into white noise, that’s still exposure to massive noise, over and over, for years on end. Exposure to loud noise has been linked to all sorts of malign psychological effects, some of which sound like George in his dour moods.

But noise wasn’t the only factor of Beatlemania—there were also the jelly babies. You laugh, but I can imagine a near-constant flinch reaction from that. And people were acting crazy—tearing at the Beatles, tearing at themselves. What would they do if they caught a Beatle? J/P/G/R didn’t know, because the fans themselves didn’t know. At every concert, there was a very real possibility of being torn to pieces, and the security and other distancing aspects of the experience were very rudimentary. And there was no relief; people were constantly trying to sneak into their suite, backstage, even onstage.

I’m going to say something somewhat controversial, but to me Lennon’s demise, and Harrison’s near-demise, are an entirely predictable, logical, perhaps even inevitable Act Two to what happened to them from 1962-66. And I think all four of them were very aware of this possibility, even as young men, even if we fans weren’t.

Even factoring in the resiliency of youth, I think you’d have to be more than human to avoid severe nervous system effects from Beatlemania. I think all of them were definitely traumatized by it, in proportion to their own neurological tendencies. After 1964, the band’s drug use strikes me as less volitional—less “let’s have fun!”—and more of an increasingly strong adaptation to ongoing Beatlemania. Using stronger and stronger chemicals to forcibly detune their nervous systems, and detach from reality.

So the second question: was George traumatized? I think he certainly was, not least because it seems he felt he was. George famously said, “[The fans] gave their money and they gave their screams, but the Beatles kind of gave their nervous systems.” George seems to have liked the money and power and ability to travel and nice things; it was the attention he didn’t like. The imposition. The craziness. He must’ve looked at someone like Jeff Lynne with envy; famous, wealthy, successful—but not so much so he was hunted.

Not for nothing George became fascinated by one of the few corners of the world, India, where he could travel about freely without being mobbed. And just as John chose Yoko, someone who actively disdained Beatle-worship, George’s gurus neither knew nor cared about his status as a Beatle. John and George especially seemed to seek out those who weren’t infected with the happy madness…a condition that to them, must’ve looked like plain old madness. John holed

Of the four, George was the most publicly averse to the experience of mega-celebrity, even before the attempt on his life. Of the four, George is the one who seems to like the fans the least, and resent them the most—in public at least. But George doesn’t seem to be hateful in general; he actually seems to have a lot of friends, maybe the most of the four, and seems to be really congenial with them…just not to strangers who want stuff from him. Contrast this to Paul, who always has time for a fan, but—I’ve never heard anyone being called, “Paul McCartney’s close friend.”

As I’ve gotten older, longed for more peace and quiet, and had several brushes with celebrity, all of which have made me shiver, the destructive impact of Beatlemania as a lived experience has become sharper and sharper to me. I don’t think you can understand the Beatles story without very deep thought, empathetic rumination, on this issue. Thanks for the question. Hope everybody is well.