NANCY CARR * While looking at the jade collection in the Crow Collection of Asian Art in Dallas earlier this week, I was surprised to hear “My Sweet Lord” playing faintly in the distance. A museum worker was moving pedestals around in a nearby gallery, preparing for a new exhibit: was she listening to the radio quietly? Or did I just have such an advanced case of Beatles-on-the-brain that the song was only in my head? 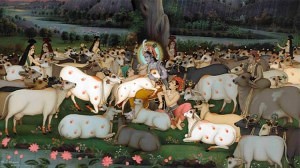 Krishna, cowherds, and cows sheltering during a storm by B.G. Sharma

No, the answer was upstairs, in the exhibit “Seeing and Believing: Krishna in the Art of B.G. Sharma.” Ascending to the second floor, a museum employee handed me a magnifying glass and said “You’ll need it. The detail is incredible!”

I knew nothing at all about the 20th century Indian artist Banwarhlal Giridharlal Sharma before walking into the exhibit. I also know  precious little about Krishna, the subject of much of Sharma’s work. His lavishly ornamented, jewel-toned watercolors were at first more mystifying than mystical to me.  But it felt fitting to hear George’s hymn of aspiration and devotion while looking at religious images that deliberately fuse the earthly and divine.

As I read the curators’ introduction to Sharma’s work, it reminded me of how often Harrison’s solo work has been dismissed as preachy and repetitive: 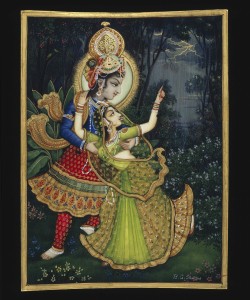 Krishna and Radha in rain, by B.G. Sharma

“Sweetness without a tinge of irony is out of fashion. Distance from sweetness is more often invoked as a measure of difference between high and low taste. Sweetness, however, is central to the work of B. G. (Banwarhlal Giridharlal) Sharma, whether in his designs for commercially produced prints, which dominated the Hindu market in the second half of the 20th century, or in his finely painted works in precious mineral colors on cloth, paper, or ivory . . . . This exhibition proposes that visitors set aside habits of viewing that resist sweetness with labels such as “kitsch,” or dismiss pictures that tug at sentiment as invasive. These are pictures that rest on ethics of long cultivation and refinement and address sense awareness with a sophisticated understanding of human nature. They seduce with friendly but frank eroticism. They demand to be looked at, to be communicated with, and to be indulged by our reason.” 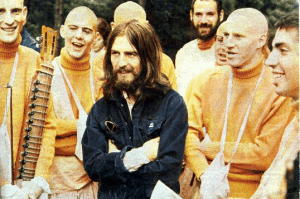 Harrison with members of the London Radha Krsna Temple in 1969

Sharma started as a maker of inexpensive devotional prints, and as the introduction suggests, his work has sometimes been considered kitsch. I’m not naturally drawn to his style, and I can see why the curators felt it necessary to urge visitors to “set aside habits of viewing that resist sweetness.” But the longer I spent in the gallery, the more I felt the sheer devotion that went into each painting. The detail is incredible, and those details are imbued with spiritual meaning for Sharma and those who share his beliefs. We’re meant to look through these paintings as much as at them, as we’re meant to hear in Harrison’s repetition of the phrase “my sweet lord” the effort and time involved in aspiration. Thinking about the investment of time each of Sharma’s paintings represents, I thought of Harrison’s line “But it takes so long, my Lord.”

George Harrison isn’t the Beatle whose music I connect with most readily, but as the years pass I find more in it to admire. He sometimes lacks artfulness, but never sincerity. He showed a willingness to put his time and energy where his mouth was, as in his work with the London Radha Krsna Temple and Ravi Shankar.

And, like Sharma, I think Harrison was always seeking sweetness. Surely it’s the gap between the sweetness he longed for and the world he experienced that accounts for the bitterness of some of his songs. (I think especially of “Piggies.”) Conversely, on the occasions he could give the sweetness he yearned for full voice, he was matchless. I left the Crow Collection thinking of “Here Comes the Sun,” one of the songs that first drew me to the Beatles, and the best-selling Beatles song on iTunes. I think Harrison would be pleased to know that his music is helping to enhance visitors’ experience of Sharma’s work.